What to Expect When You're Expecting Economic Recovery 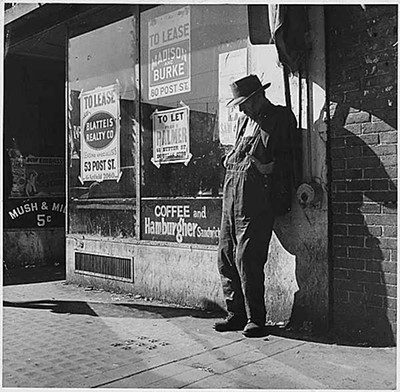 In an interesting piece in the October Atlantic, Benjamin Schwarz surveys a collection of books about daily life during the Great Depression in an attempt to glean some lessons from the past about what we can expect in the near future as the nation lurches toward economic recovery.

The good news, Schwarz discovers, is that the Great Depression was not, in reality, as terrible as the mythology that surrounds it: "For all the terrible unemployment figures and searing WPA images of Dustbowl migrants, the typical worker remained on the job, though he had most likely been forced to take a pay cut."

The bad news is, many middle-class workers -- those with white-collar jobs that approximate those of many Americans today -- never returned to the same level of economic security they enjoyed before the crash wiped out their savings accounts, and with them, many of their plans for the future.

Schwarz bases many of his conclusions on Robert S. and Helen Merrell Lynd's Middletown in Transition, a sequel of sorts to their seminal 1920s study of "Middletown", really Muncie, Indiana:


The Depression ruined schemes for such baubles and pleasures as the new car and the winter vacation. But it also at best disrupted and at worst (and often) destroyed carefully wrought plans for so-called investments in the future: the substantial house in the stable neighborhood, the savings account, and, most important, what was then and remains the cynosure of American middle- and professional-class family life--a college education, or a certain kind of college education, for the children. Even today, that investment largely determines the opportunities parents seize or forgo, the towns they move to, the rhythm of a family's daily life. The Depression rendered any careful planning for the future, an activity that depends on predictable conditions, all but impossible, or at least crazy-making.

Again, most earners in the middle classes were still employed, but their livelihoods were in daily jeopardy; throughout the country even those at the apex of the professions--doctors and lawyers--saw their incomes drop by as much as 40 percent....They'd never get back to where they'd been, to the foundation on which just a few years before they had assumed their future would be built (not unlike, say, parents of today who have for years carefully contributed to now-clobbered 529 plans for their adolescents). Disaster was always imminent; the future was at best chancy and diminished.

This is all far less romantic than the images hoboes and apple-sellers and the idea that World War II fixed everything.
Other effects of the Great Depression: decline in marriage and birthrates (and probably recreational sex as well, though the only data that supports this supposition is a lower rate of the clap among Civilian Conservation Corps recruits than World War I draftees) and an increase in family togetherness, which in those days occasioned lots of time assembling jigsaw puzzles and playing Monopoly. (Yes, the game was originally conceived ironically; its inventor, Charles B. Darrow was, at the time, unemployed.)

In modern terms, this can probably be translated into an increased dependence upon birth control and Internet social networking. Apparently, though, Americans became much more interested in gardening and baking their own bread. Does that mean we'll lose interest in whole foods, too, once we can afford to eat out again?