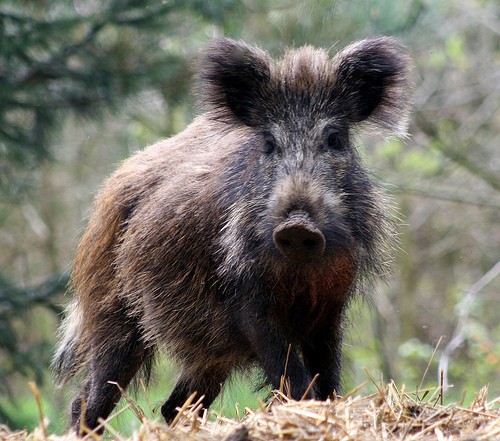 5) Feral hogs are exploding in Missouri!
Not literally. Their numbers are swelling, says the Missouri Department of Conservation. The offspring of domestic swine, wild razorbacks and Russian boars have formed entrenched populations in 20 counties (most in the southern part of the state).

Most weigh less than 200 pounds, but some have ballooned to over 500 pounds.

They've sprung up mainly from ranches where they were bred and released so hunters could pay to chase them down. But they've spread beyond control. Federal and state officials already "removed" 400 of them from public and private property this year.

3) Government officials are gunning them down from helicopters!
That one kind of speaks for itself. Another efficient removal tool is the "corral-type trap" with a one-way door. Officials have tried creating "Judas pigs," whereby a hog is trapped but released with a radio-tracking collar. The idea was that he would wander back to his herd and give up their whereabouts. But that approach apparently hasn't worked very well.

2) The government is spying on feral hogs!
State officials are tagging some wild hogs with GPS collars to observe their habits, and how they change their behavior when they're being hunted.

1) Feral hogs can make you depressed!
They're carriers of swine brucellosis, which can infect humans and cause undulant fever. Symptoms include arthritis, urinary (and heart) inflammation, meningitis and depression. They carry pseudorabies as well, which can decimate a domestic hog population (and cripple the state's pork industry). Aside from spreading maladies, feral hogs tear up crop fields. They also like to wallow in freshwater streams (after which the term "freshwater" may no longer be the accurate label).