Jumbling Towers at the Firebird

Music writer Bob McMahon was at the first Jumbling Towers show in St. Louis in about a year, and had this to say about the group: "After a seemingly interminable hiatus, Jumbling Towers made its long-awaited return to the stage last night with a powerful, if occasionally shaky, reminder of why it's one of St. Louis's best indie-rock bands. Not playing a show in about a year left the quartet with some rust to discard, but the Towers still put on a winning performance that offered a great showcase of their unique sound." Read the rest of his review here.

On Saturday night, one of downtown's longest-running nightclubs, the Pepper Lounge, celebrated seven years in business with a party. Egan O'Keefe was there and has these photos. After looking at this photo for a while, I'm still not quite sure what's going on there.
Crocodiles at Halo Bar 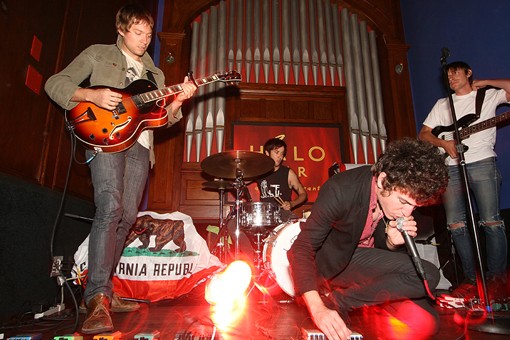 Here in the Loop, the Pageant and its adjoining Halo Bar hosted two concerts, about an hour apart from each other. The first was a free show with Crocodiles, a buzzed-about California duo-turned-full-band, which played a free show, unlike its last visit here when they didn't play at all due to sound issues. From the looks of this photo, the band more than made up for it with its performance Saturday night. (Bonus music points: Check out the F.U.'s shirt worn by the drummer, who also plays in Italian punk band Smart Cops.)

Hottub at the Pageant

Three female singers make up the raunchy, hip hop-punk group Hottub, based in Oakland. On Saturday inside the Pageant, the group moved the crowd, invited people on stage and did a lot of air-humping, on its stop here as part of the "No Sleep 'Til Oakland" tour.