Local Man Was Saddam Hussein's Nurse....And He Lived to Tell 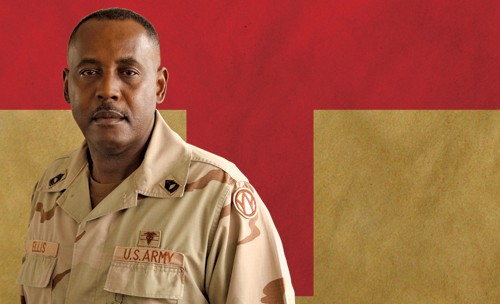 ​Five years ago Robert Ellis got tasked with the most memorable assignment of his life: keep Saddam Hussein alive.

Ellis, a 59-year-old surgical nurse at Barnes-Jewish Hospital, had just arrived in Iraq for a tour with the U.S. Army. Now retired from the military, Ellis was then a master sergeant reservist with the 439th Military Police Detachment. He became Saddam's nurse.

For eight months, Ellis visited Saddam twice a day, checking his vitals and forming a bond that left him conflicted. "My orders were to keep him alive and healthy," Ellis tells Daily RFT. "By no means possible was he to die in U.S. custody. That was always on my mind. I was to do whatever it took to keep his spirits up and his blood pressure down, so he could go to the gallows a healthy man.

"I'm not in the habit of deceiving people, but that was my job. In the back of my mind I knew what was going to happen. That was a part of the conflict I experienced. We were going to all these great lengths to keep this man happy when we were going to kill him anyway."

Co-authored with former St. Louis Post-Dispatch reporter Marianna Riley, Ellis tells all in a new book, Caring For Victor. ("Victor" was the military's code name for the former dictator.)

Saddam was executed in December 2006 after going on trial for dispatching death squads to slaughter his own people. More than 180,000 Iraqi Kurds are believed to have died during the Anfal, or "spoils," a scourge considered Saddam's most brutal ethnic cleansing campaign.

But Ellis was under strict orders not to talk about any of that with the former Iraqi ruler.

In fact, says Ellis, their interactions were friendly. Growing up in the Pruitt-Igoe housing project in St. Louis, says Ellis, helped him see Saddam's human qualities. As Ellis puts it, "There are two sides to everybody."

For one thing, Saddam was a neat freak who was allowed to keep cleaning supplies in his cell so he could keep the floor spic-and-span. He drank from a water bottle without letting it touch his mouth.

"And he liked to read," explains Ellis. "He was a prolific writer. He liked children. He'd save food from his meals and feed the birds everyday. He had a garden -- I initially thought it was a patch of weeds, but then I found out [an FBI agent] had given him seeds to plant -- and he was always watering his plants. He said he'd always had a garden growing up."

Ellis says he never saw much of Saddam's dark side. "Once he told me he didn't take particular joy from the things he did. He just had to make difficult decisions at different times."

After eight months, Saddam was transferred to another facility and out of Ellis' care. The nurse remembers going to see Saddam at Camp Victory sometime later. "He kind of vented, because the way his cell was set up people could see him using the bathroom. He had been eating and he took one of his wet wipes and took half the food off his plate to give to me. We sat there and ate [in his cell]. Eventually the guards came to run me off. He turned to wash his hands, I tapped him on the shoulder and told him I had to go. I told him to take care of his self, he told me to take care of myself, and that was the last time I saw him."

Ellis and Riley are speaking tonight at the St. Louis County Library (headquarters) at 7 p.m.

St. Louis, you might recall, has its share of connections to the vanquished Iraqi strongman. It was a local auto mechanic named Samir who yanked him from his spider hole in December 2004, and another St. Louisan named Michael "Sonny"Trimble who led the Mass Graves Investigation Team, which assembled evidence to prosecute Saddam. You can read both stories right here: "I Punched Saddam in the Mouth" and "CSI: Iraq".