By the Boards: Dennis Brown on the STL Theater Scene September 10-13

The 2009-'10 theater season officially kicks in this weekend with the opening of the Rep season. Amadeus, Peter Shaffer's 1979 drama about one man's attempt to bring down God, is sure to provide sumptuous sets and costumes and lots of thrilling Mozart music (played not too loudly, please). But there's another offering this weekend that, on its own modest level, is highly intriguing. The Theatre Guild of Webster Groves opens a two-week run of Samuel Taylor's rarely seen romantic comedy, Sabrina Fair. 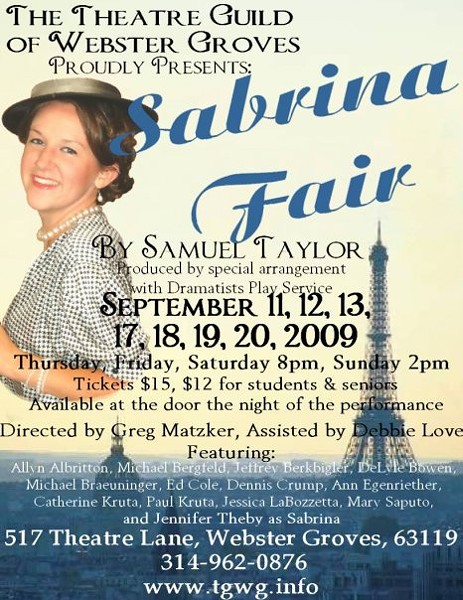 Have you ever seen Sabrina Fair? No, not the 1954 Billy Wilder film adaptation Sabrina. We're talking stage here. Chances are you haven't -- and in large measure because of the movie.

Here's what happened: It all starts with Roman Holiday, the 1953 William Wyler film that made a star of Audrey Hepburn. When Paramount Pictures executives saw that film's rushes, they realized they had a gold mine in the still-unknown Hepburn. They had to get her into another film fast. So they bought the film rights to the Broadway-bound Sabrina Fair, a Roman Holiday-like Cinderella story. Billy Wilder was assigned to direct. His collaborator on the script was to be the play's author, Samuel Taylor.

But Sabrina Fair is a drawing-room comedy (whose action happens to occur on a garden patio). Nothing much in the way of plot happens here; mainly the characters just talk. Wilder did not find talk to be very cinematic. There is a story, perhaps apocryphal, that when Wilder and Taylor first met, the playwright asked, "Do you want me to bring the play script to our first session?" To which Wilder replied, "Yes, we can use it as a doorstop." What is not apocryphal is that Taylor was so shocked by Wilder's wholesale changes -- his play hadn't even opened yet, and already it was being dismembered -- that he quit. Wilder took on a new collaborator (the novice Ernest Lehman, fresh from Executive Suite) and plowed ahead.

By the time Sabrina Fair (starring Margaret Sullavan and Joseph Cotten) opened on Broadway in November 1953, Wilder's movie adaptation (starring Hepburn and Humphrey Bogart in those same roles) had already been filming for two months. The comedy of manners was well-received by the critics and ran for nine civilized months. The Broadway production closed in August 1954; the film version opened four weeks later and became the third highest-grossing film of the year.

Which pretty much sealed the play's fate. Who wanted to sit and listen to a lot of conversation, however witty, when you could see Billy Wilder's visual high jinks?

The spine of the two pieces is the same: The lowly daughter of a chauffeur who has grown up in the shadows of a Long Island estate returns from Paris to claim the man she has secretly loved. But the similarities stop there. Many of the characters are not the same. Was Wilder wrong to initiate so many changes? Probably not. If filmed literally, Taylor's play might have been about as satisfying as most literal film versions of George Bernard Shaw plays. But if Wilder's Sabrina is a textbook study in adaptation, Taylor's now-obscure comedy of manners, while perhaps artificial, is a droll, urbane example of a genre that has fallen by the wayside in our more restless times.

See it now, or forever hold your peace.