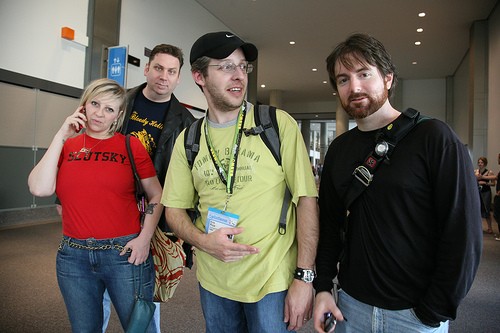 South By Southwest (or SXSW) is a well known music festival that happens in the spring in Austin every year. It's been around since 1987 and has become one of the biggest and most important festivals of its kind. But in recent years there has been more to it than just music. In the 1990s the festival organizers added film and interactive conferences to the SXSW brand. Both have become as important -- or maybe even more important -- to their respective industries than the music conference is to its industry.
The interactive conference has probably had the most growth in the last two or three years. SXSW is where Twitter debuted in 2007. Last spring was the biggest SXSWi yet and if looks as though 2010 will be even bigger.

Each fall the panels for the spring conference are chosen via an online "Panel Picker" poll. The voting ends today, so if you want to have any input you might want to head over there, NOW! Just browsing some of the proposals on the Panel Picker can be fun. It seems the strategy for a lot of organizers is to make a provocative panel title that will hopefully get votes. There is the sexy: "Librarian Glasses or Stripper Heels" the ridiculous "BAM! An Entire Statewide University System Goes Virtual"  the enigmatic "Sex, Puppies and Golden Microphones"  the boozy "Booze Blogging: Liquid Conversation"  and the nerdy: "Accessibility In Microsoft Silverlight" ... ok, well ... they're all pretty nerdy.
But that's the great thing about SXSWi. If you're a nerd, you will never be more at home than here. And if you are an alcoholic nerd, even better (or worse). All throughout the festival there are sponsored parties with free food and top-shelf liquor at many of Austin's finest bars (and Austin has a ton of bars). Your SXSWi badge is your ticket to all of it.

Here are some St. Louisans who have proposals on the Panel Picker. (This may not be a complete list, so if you know of more please let us know in the comments)

David Gray who built an actual business by doing info graphics with his company Xplane has two proposals up on the SXSW panel picker:

Browsing the Future: Visualizing the Everywhere Internet
In an always-on world of mobile devices and ubiquitous, "everything, everywhere" computing, what happens to the web browser? How do we access an emerging internet of people, places and things? Design thinkers from Google, Microsoft and Yahoo will attempt an answer, with sketches by Dave Gray of XPLANE.


The Book is Dead. Long Live the Book!
The book has been a stable technology, unchallenged for a thousand years, but times are changing. As we enter a post-industrial society, we are starting to see a more fluid, networked book, curated by individuals and small groups. What does that bode for the future of the book?

The Future of Journalism is Visual
Attention to reality is fractured, splintered and distributed among a plethora of devices and platforms. We have thousands of choices about where to get our news: flickr, YouTube, Jon Stewart. We're tired of journalists whining, and there be no whining on this panel. The future of news is visual.

And Will Sullivan the Interactive Director at the Post-Dispatch has this proposal before the picker:

Process Journalism: Getting it First, While Getting it Right.
Iterative journalism, process journalism, wiki journalism -- call it what you want -- the 'first draft' of history is rapidly changing with digital reporting and immediate delivery. In this panel, we'll investigate technological tools, best practices from bloggers to NYTimes.com, transparency and ethical challenges faced report accurate news in the social media age.

So if you plan to attend, show some hometown pride and head over to the panel picker and give the thumbs up to these guys. As we said, voting ends later today so don't wait.

The final confirmed schedule should be revealed next month.