September 03, 2009 at 1:20 PM
comment
Last August, the ever-brooding Jeff Kent, finishing out his career with the Los Angeles Dodgers, threw one of his patented hissy fits when a Los Angeles Times columnist had the temerity to suggest that Manny Ramirez's arrival had helped Kent raise his batting average by twenty points. 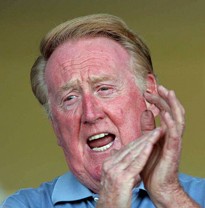 Apparently, it was the legendary Vin Scully, the Dodgers' Hall of Fame broadcaster, who made the seemingly benign observation, thus incurring the second baseman's wrath.

"Vin Scully talks too much," growled Kent, perhaps unaware in the heat of the moment that the iconic Scully has been laboring in the Dodgers broadcast booth for six decades. He is known for his keen insights.

But now, as it turns out, it looks as though the ill-tempered Kent may be on to something. 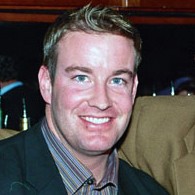 The Wall Street Journal's David Biderman -- he obviously must have a great deal of time on his hands -- has come out with a "scientific" study which determined that Scully is baseball's biggest broadcast blabbermouth, with the Cardinals' Dan McLaughlin right behind him.

In conducting his groundbreaking feat, Biderman went to every team's home broadcast and tallied up the words of the play-by-play announcer during the game's first inning. Scully clocked in at 143.51 words per minute. The chatty McLaughlin spoke 109.93 words. The garrulous McLaughlin, notes Biderman, was able to drive up his word count with his animated comparison of Albert Pujols to Babe Ruth, along with a windy soliloquy on how he believed the Red Sox gave up too soon on Chris Duncan.

The Most Laconic honor went to the Giants' Duane Kuiper. He barely topped 55 words per minute. Funny -- he's the voice of a team that has a lot to crow about.