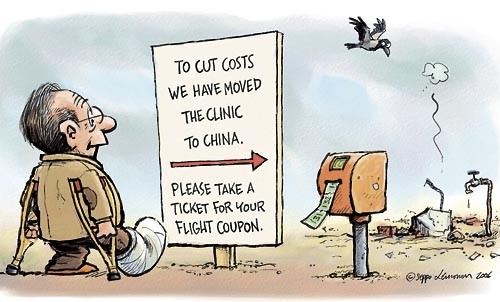 It's becoming obvious that the vocal minority (or is it a majority?) in the Show-Me state doesn't want any kind of improvement to the nation's health care system (even if it has them taking handouts to pay medical bills incurred while opposing said improvements). But that doesn't mean the haters won't soon be old, sick, and in dire need of medical treatment that won't cost them an arm and a limb.
So what's a body to do? According to an article in today's USA Today, the solution for many Americans is simple: move to Mexico.
South of the border retirees are offered "a health care plan with no limits, no deductibles, free medicines, tests, X-rays, eyeglasses, even dental work -- all for a flat fee of $250 or less a year."
Of course, moving to Mexico also means dealing with swine flu, a violent drug war, hurricanes, and a court system that doesn't take kindly to malpractice lawsuits. For one St. Louisan, however, the cheap surgery was worth the trade-off.

Bob Story, 75, of St. Louis, had prostate-reduction surgery at an IMSS hospital in Mazatlán and discovered that patients were expected to bring their own pillows. It was a small price to pay, he said, for a surgery that would have cost thousands of dollars back home.

"I would say it's better than any health plan I've had in the States," he said.

Perhaps a "BYOP" (bring your own pillow) policy should be the cornerstone of the next Obama health proposal.