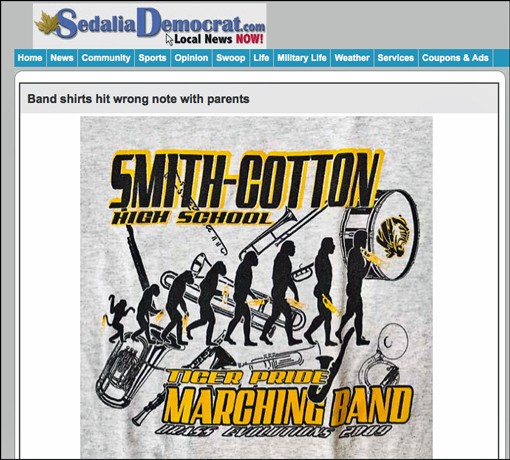 The Scopes Monkey Trial was decided 84 years ago this past July, but in Sedalia, Missouri, you'd think it's the summer of 1925 again.

​ That's because the band director at the town's Smith-Cotton High School recently got in hot water for making T-shirts that depict primates evolving into man. The shirts -- based on the popular illustration above -- were designed to promote the band's fall program, "Brass Evolutions," that explores how brass instruments have changed from the 1960s to today.

On the T-shirt, monkeys and early humans hold trumpets throughout their various stages of evolution.

That didn't sit well with Sherry Melby, a teacher in the school district and mother of a band member. Yesterday Melby told the Sedalia Democrat: "I was disappointed with the image on the shirt." Melby said. "I don't think evolution should be associated with our school."

Thanks to complaints from Melby and other parents, the school's assistant superintendent, Brad Pollitt, has asked students to turn in the t-shirts because the district is required by law to remain neutral in religious matters.

Said Pollitt: If the shirts had said 'Brass Resurrections' and had a picture of Jesus on the cross, we would have done the same thing."