What the Post-Dispatch Missed About Milton "Skip" Ohlsen 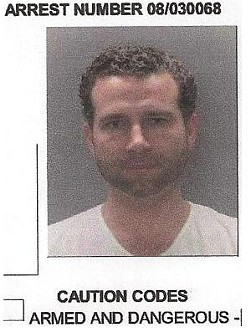 If you didn't see it yesterday, the Post-Dispatch ran a front-page article on Milton "Skip" Ohlsen, the man behind a federal probe into state Sen. Jeff Smith and state Rep. Steve Brown.

The P-D article brings to light many of Ohlsen's previous criminal transgressions as well as his work with the Missouri Democratic Party.

As the daily reported, Ohlsen and former Missouri governor Bob Holden were acquaintances in 2003 and 2004, with Ohlsen and his now ex-wife, Michelle, having dined at the Governor's Mansion on at least one occasion. (Campaign records show that the Ohlsens were also contributors to Holden, donating $2,350 to his campaign in April 2003.)

The newspaper also chronicles how Ohlsen -- a convicted drug dealer -- came out of nowhere to serve as a political consultant to Missouri democrats. The paper leaves out, however, a couple key details about the 37-year-old Ohlsen.

For starters, the daily is fairly vague on exactly what Ohlsen did as a "political adviser" for the Missouri Democratic Party and its candidates.

Those who worked with Ohlsen, say he was more of a videographer than an operative.

"We were hired to film press conferences and stump speeches that candidates could use on their websites or for their campaigns," says Jason Wathan, a camera and sound technician who worked part-time for Ohlsen on campaigns for Bob Holden, Jeff Smith and former state Sen. Maida Coleman. "For the most part, it was stuff that I'd expect any candidate to do."

Prior to getting into politics, Ohlsen made a living running a janitorial service called Complete Contract Management (CCM) that cleaned Wal-Mart stores in the Midwest, according to those who know him. On June 20, 2002, Ohlsen registered CCM in Nevada. That very same day, another company tied to Ohlsen -- Studio O Productions -- was also incorporated in Nevada.

Ohlsen would use Studio O and yet another company -- Democratic Strategy Group -- as the names of his fledgling political-media operation that began shortly after he volunteered for Jean Carnahan's 2002 U.S. Senate race. Ohlsen made several political connections during the race and -- as the Post-Dispatch noted yesterday -- the United Auto Workers was one of his first entities to hire Ohlsen to record its events.

Besides the UAW, Ohlsen also shot film for the Missouri Democratic Party, says Wathan. In 2004, the party hired Ohlsen and his camera crew to fly with them to Boston to attend that year's Democratic National Convention.
"We taped the Missouri delegation as they attended parties and the convention," recalls Wathan, who describes Ohlsen at the time as appearing "very articulate" and "professional." "We were supposed to be making a memento of sorts for the delegates, though I can't say I ever saw the finished product."

Wathan parted ways with Ohlsen a few years ago and claims he is still owed money for some graphic-design work he did for his former employer.

Wathan says he was surprised recently when he learned his name was mentioned in a Federal Elections Commission investigation into Ohlsen and Jeff Smith's 2004 campaign for U.S. Congress. According to the FEC report, Wathan's name appears in financial records as a signatory to a mysterious political committee called Voters for Truth (VFT). Wathan says he knows nothing about VFT. And in their report, FEC investigators clear Wathan of any involvement in the organization.

Another of Ohlsen's former associates with more insight into VFT says Ohlsen formed the committee to serve as a political action committee like Swiftboat Veterans for Truth and other PAC's that made a splash during the 2004 elections.

According to the source, who spoke to Riverfront Times only on the condition of anonymity, Ohlsen created Voters For Truth (VFT) to hide political dirty work.

One of Ohlsen's initial ideas, says this person, was a website designed to smear Claire McCaskill (who challenged and defeated fellow democrat Bob Holden in the 2004 gubernatorial primary). The Holden campaign, however, rejected Ohlsen's idea.

Later, VFT is what Ohlsen allegedly used to mail out postcards questioning the voting record of Russ Carnahan during his race against Smith and other contenders for U.S. Congress in 2004. Those postcards later prompted Carnahan to ask the FEC to investigate the Smith campaign.

Perhaps most interesting, says the former associate, was Ohlsen's habit of tape recording nearly all his conversations. "I always assumed that every conversation I had with Skip was being recorded," says the source. "He'd wear a lavalier mic under his shirt and feed it to a mini-disc recorder in his pocket. It was his way of hedging his bets."

Some people observing the Ohlsen affair suggest that the government may be using some of his audio tapes in its investigations into Smith, who denied involvement with VFT and the postcards when questioned by the FEC.

Late last December the FBI obtained a warrant to search Ohlsen's downtown St. Louis loft apartment. It's unclear what the feds discovered in the search. But Ohlsen's attorney, Paul D'Agrosa, has asked the court to suppress all evidence found in the apartment. D'Agrosa also has denied claims that his client -- who pleaded guilty in May to mortgage fraud and weapons charges -- is cooperating with federal authorities.