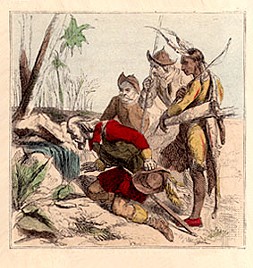 See, before the Cardinals actually went out and acquired the Ghost of Cy Youngs past, back when the whole thing was just the fevered dream of a madman, I asked of the world at large if John Smoltz was, in fact, the answer.
Well, after watching him utterly dominate the San Diego Padres yesterday, striking them out left and right (pun most definitely intended), the answer is now a resounding, shout-from-the-rooftops maybe. What? You don't want maybe? Well that's just too damned bad. Maybe is what you get.
However, I will say this: it's much, much closer to yes than it was just a few days ago. Call it maybe with a chance of definitely.
I am going to say this right now: the pitcher I saw take the mound yesterday for the Cardinals looked very little like the guy I saw throwing flat breaking balls in Boston. I had made it a point to watch several of Smoltz's starts for the Red Sox this year; not because I had some sort of psychic flash the Cards might end up acquiring him at the deadline or anything, but because Smoltz was one of my very favorite players for a long time, and my second favorite Atlanta pitcher during their halcyon days, right behind the immortal Steve Avery.
Earlier in the season, I just didn't see much bite on the breaking pitches Smoltz was heaving toward the plate. His slider still moved laterally quite a bit, and he was able to get righties to swing and miss at it if he kept it away from them, but there wasn't a whole lot of down to the pitch. Yesterday, on the other hand, the slider had outstanding tilt. There wasn't a flat one in the bunch, and the right-handed hitters of the Padres just had no chance.
Even more impressive, though, was the splitter. I'll be perfectly honest: it was a John Smoltz splitter, and that's all that needs to be said about it. If that's actually the split-finger pitcher Smoltz is going to bring with him the rest of the year, I think things may just be alright.
Now, I will say this: I still worry about Smoltz's stamina and his ability to pitch deeper into games than about four or five innings. Even yesterday, when he wasn't stressed at all through the second and third innings, you could see him start to labor a bit in the fourth and fifth. His velocity was still good, though it did begin to flag just a bit. In the second inning, Smoltz threw seven fastballs; all were 92 mph or better. In the fourth, he threw nine heaters, only one got to 92. Is that a big deal? From a performance standpoint, no. But from the standpoint of looking at a pitcher still dealing with the effects of major shoulder surgery, it might be. More importantly, Smoltz's breaking pitches didn't look as sharp in the last couple innings; there were a couple in there that I thought looked decidedly hangerish, but he got away with them.
That's the one and only concern I still have at this point, really; is Smoltz going to be able to go more than, say, four innings effectively at any point this season, or is his surgically-repaired right shoulder going to limit him to just a few innings at a time? Perhaps this still points to relief work down the road. You could certainly do worse than to have the kind of dominance we saw yesterday for an inning or two come playoff time, but at this point, that might almost be a bit of a letdown. I'm sure we're all dreaming right now of a Carpenter-Wainwright-Smoltz trifecta of doom, throwing shutouts at every team in sight in October, but it may not be in the cards. Tough to say just yet.
We'll know more, of course, when we see Smoltz pitch against a lineup composed of non-Padres, but for now, I have to say I'm rather ecstatic with what we say yesterday. Maybe Smoltz really did have something going on with his arm slot. Or maybe he was tipping pitches. Or maybe the time off to actually do some side work really helped. Or maybe it's just a little more of that magic St. Louis pixie dust we manage to toss so liberally around this time of year. Whatever it is, I will certainly take it.