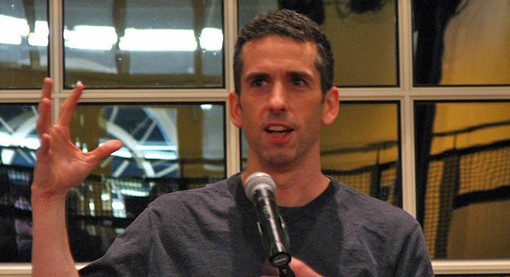 Haven't you always thought that HBO was a little lacking in the sex department? Sure the network has Real Sex, but it's not "real"-- with its exposés on sex toy factories and the like. Taxicab Confessions is pure voyeurism, Cathouse is wonderfully sleazy and sensational. And all the cheesy, low-budget, late-night action has always been on Cinemax's "Max After Dark" programming block.

You know what HBO needs? A little Dan Savage. Nay, a lot of Dan Savage.

Apparently, the network agrees, at least according to everyone's favorite foul-mouthed, self-effacing syndicated sex columnist on his hometown paper's blog:

According to a draft of press release that's sitting on my desk here at HBO--in my own office! with a lock on the door! I could be naked in here!--"Savage Love," the (potential) teevee show, "will focus on current events and cultural trends with sex as the filter." I'm hoping to bring a new kind of conversation to TV about sex--an honest conversation, one that's informed without being (too) wonky, funny without being (too) cruel, sexy without being (too) cheesy. Basically, my sex-advice column--but on the teevee!

Disney must have lost the bidding war.

Savage will show the pilot to HBO execs on August 27, according to SeattlePI.com:


I just turned 20 and have been out of the closet for a year. A lesbian friend wants to hook me up with her gay friend, let's call him Kyle, a cute, fit boy who runs track and does theater. The issue is, he's just 17 and starting his senior year in high school, while I am entering my junior year in college. The age of consent where we live is 16. I realize the age difference is not too big, but he is technically still a minor. I'm only mildly experienced (I've had just one boyfriend), and I'd like to think I'm a nice guy. Also, the gay pickings are rather slim around here.

Are there certain things to keep in mind besides the usual respect and honesty, or should I treat this as any other potential meeting? Does the "campsite" rule apply with such a small age gap?

--Man In Need Of Recommendation

If you hit it off, MINOR, it would be a shame if you didn't allow Kyle to benefit from your wisdom, experience, and cock just because he wasn't born 12 months earlier. And if you start going steady--which is what kids used to do before hooking up ruined everything--and he's out to his family, I would urge you to meet his parents. They might not be entirely comfortable with their son's sexuality, and meeting the college boy who's boning their son might be awkward. But if you go out of your way to reassure them about your intentions toward their son--above and beyond boning--they may feel a bit more at ease about the relationship.

As for the campsite rule--"leave him in better shape than you found him"--others have pointed out that the rule should apply regardless of age, sexuality, species, etc. I agree, of course, but I still believe that older, wiser, and more experienced partners have a special responsibility to leave their sex partners in better shape than they found them and should be encouraged to make a special effort.