Behind the Story: Jim Stewart's Website and Dr. Alex Kalk

August 20, 2009 at 9:00 AM
comment
This week's RFT feature story delves into the strange life of Dr. Alexander Kalk. A bitter divorce and a battle with mental illness sent the physician on a three-year-long downward spiral. To cite just two incidents, he was arrested for disorderly conduct at the St. Louis Galleria after mall security guards confronted him about wearing a wedding dress and he dumped hundreds of patient medical records in a trash bin behind a shopping mall. He was able to continue seeing patients until he surrendered his Missouri medical license last month. Click here to read the whole story.
For the next few days we'll be posting images, documents and links to items that didn't make the print edition. The first installment covers the website created by Kalk's former friend, business associate and patient, Jim Stewart.
Here is a screen cap of the site's homepage, which Stewart has already updated with his take on the RFT feature story, below in red text: 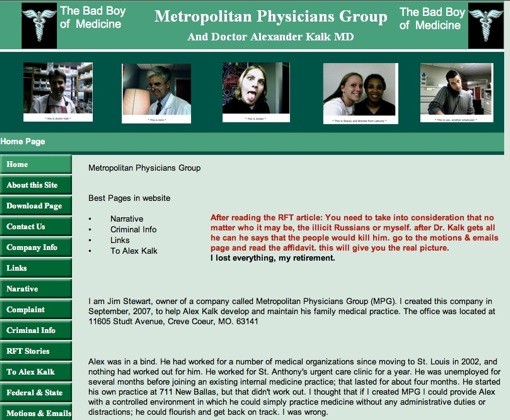 Here are a few brief selections from our feature story chronicling Stewart and Kalk's relationship:
As doctor-patient:

Jim Stewart arrived at Kalk's office on Old Ballas Road as a new patient on a fall day in 2006. He was 47 years old with dark gray hair slicked back across his head. He suffered from cerebral palsy and other ailments and was earning a living chauffeuring prostitutes.

In September 2007, a year after they met, Stewart and Kalk decided to go into business together and registered a corporation called Metropolitan Physicians Group with the Missouri Secretary of State. Stewart was listed as the chief officer and says he bankrolled Kalk's move to a new office on Studt Avenue in Creve Coeur with more than $40,000 in personal loans. He refuses to specify where the money came from.

Stewart (who confesses to having a lengthy criminal record) freely admits that he uses the website "to torment" his former associate. He also says it's a means to connect with former Kalk patients who are missing their medical records.
Kalk, meanwhile, maintains that many of Stewart's claims are baseless and defamatory. These range from Stewart's allegations that Kalk was employed by the Russian mafia to a section in which he has posted photos of a woman he claims is a prostitute Kalk frequently saw. 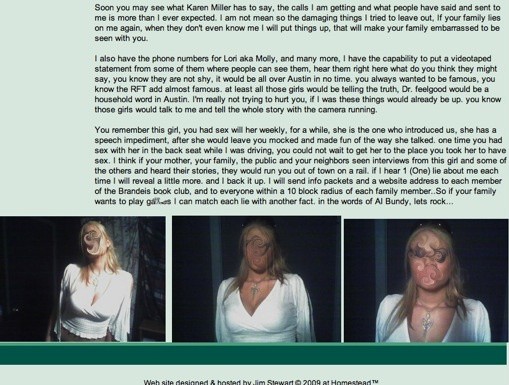 Less sensational and more practical are Stewart's compilations of other media coverage Kalk's case has received, including links to stories in the Post-Dispatch, Austin Statesman, and on KMOX.
He also has a history of his and Kalk's company, photos of the doctor (Stewart declined to be photographed for Riverfront Times' story, saying, "I don't want to be a celebrity"), a collection of e-mails Kalk sent him, and police reports. (Stewart provided two of the police reports referenced in RFT's story.)
Perhaps the most revealing glimpse into the bizarre relationship between the men is a rambling open letter to Kalk (quoted here verbatim):

You hurt my feelings. I told you a long time ago, don't you ever try and do me the way you did James Dawson. I protected you as you know, I warned you about John Tiller, everything I said was true and to help protect you. read about Tiller on the Criminal page, read the story links.

you left a trail of broken people behind you, I was there for you whenever you called, what did you do you left, me to clean up your mess, and you left me devastated. You had an opportunity to clean this up some. when I tried to call you you would not answer the phone, then you sent the phone back to me with no name or return address, not even a letter with the phone. You could have put a letter in with it saying screw you, but I got the message.

Now your family is lying on me, I only met them one time. they have a great deal to lose, especially Samara she works for the madison Capital Times Newspaper, I suspect she may be trying to use her position a the paper to help you, but if she is , she will end up unemployed. I still care what happens to you, but I wont sit back and be a victim, there are to many things to clean up, you left me no choice if you wont try and help these patients then I have to. I started out to get your attention. But that's not possible, you think you are smarter and superior to everyone. your not. investigations might be slow, but they are on going, it looks much worse trying to pretend everything is alright, I am telling you it is not. I can always get more money. what upsets me is that you planned everything. acting crazy, having humberto tell me you was in a mental institution, when your out having fun with your brother. what is Jim doing? he is trying to clean up some of your mess. you don't even appreciate that. You know if I really wanted you in jail you would be in jail.

Next: The strange advertisements Kalk purchased to run in RFT.