If you've been on Twitter or Facebook or any popular social media site for any amount of time, you've probably discovered that there are some things that a lot of people do that you find very annoying -- that anyone should find very annoying. I queried my Twitter followers for the things that annoyed them the most in social media and here are some the top things they reported.

1. Claiming to be a Social Media Expert
This seems to be a problem that's particular to Twitter, and that in itself is curious. Maybe it's easy for fakexperts to hide behind 140 characters? Maybe Twitter is so simple that the average douchebag who masters it suddenly thinks "I should be able to sell this valuable knowledge" and declares himself to be an expert. Never mind the fact that the valuable knowledge is about as complex as using a telephone. That is not to say that there are no Social Media experts on Twitter, but the real experts will never have the phrase "social media" or the "expert" in their profiles. An example of an actual expert on Twitter?  Jeremiah Owyang AKA jowyang on Twitter. He doesn't ever say he's an expert, but he actually knows shit. After hanging with him in person for a while at both CES and SXSW Interactive a couple of years ago, I can honestly verify that he is both an expert and not a douchebag.

2. Updating way too often
It happens, we all do it on occasion right? We go on a tear, or a rant and tweet three ... four ... ten times in a row in a short period of time. Unfortunately there seem to be quite a few people -- ahem -- companies who tend to have their auto-tweet bots turned up to high and every time they tweet, it craps out a string of tweets that overwhelms your stream. It's worse if you don't follow that many people and when this happens who ever does this suddenly becomes the only thing you see on Twitter. The only thing you can do is un-follow. The other culprit in the crime of flooding your stream? People who treat Twitter as a chat room, not by having real conversations (that can actually be interesting) but people who feel they have to greet every one of their friends they see in their timelines with "good morning!" or the ever ridiculously annoying "*WAVES*" instant un-follow.

3. Facebook apps: Quizzes, Puzzles, Fake Drinks, Fake Gifts
A couple of years ago when Facebook announced that they were allowing their platform to be opened up to developers to develop apps, the geek blogs went into a frenzy about how this was game changing, and a revolution, and that Facebook was some kind of new social computing platform where developers could create all kinds of applications that would be very useful. Unfortunately it didn't quite work out that way. It simply unleashed an incredible amount of useless crap like quizzes, puzzles, fake gifts, fake drinks and other assorted crap that has no utility at all. In fact, most of these Facebook "apps" are so ad laden that it seems that what Facebook was actually doing was taking their relatively spam-free network and actually inviting spammers in via this incredibly annoying bullshit.

4. Games
This follows along with the Facebook app business above, but games like Mafia Wars, Spy Master et al., have started to bleed over into Twitter too. These are role-playing games that update your status every time you do something in the game. Which, you might imagine, is quite annoying for anyone who doesn't give a shit if you just became a Mafia Don, or the head of the fake KGB in some imaginary world where you've decided to waste your time.

5. Lack of Attribution
This seems to be a particular problem with Tumblr. Sometimes it's innocent but can also malicious. Copying stuff and pawning it off as your own isn't cool. And if you share something or republish something that is Creative Commons licensed, that is totally cool as long as you follow the terms of that license, which most of the time just means that you simply give a link back to point to where you got it from.

6. Generic Birthday Wishes
Because you are on Facebook now, everyone knows when your birthday is. Which means that whenever your birthday rolls around, you get tons of birthday greetings. Which is great, and can be a real boost if you're feeling a little bit down about becoming a little bit older. But it can also be a bit of an annoyance when your Facebook wall or Twitter stream is flooded with b-day greetings, that say really creative stuff like: "Happy Birthday!" or "Happy Birthday" or even the popular "Happy Birthday!" Honestly I don't mind birthday wishes, but maybe a little personalization or creativity is in order -- that is, if you really care that it's my birthday. Or how about more of those fake Facebook "gifts" that some people pay actual money for? Awesome. You paid $5 to put a cheesy picture of a Teddy Bear on my wall. Would it be too much for you to just Paypal me the $5 next time? Because I could actually use that.

7. Businesses who create personal Facebook pages instead of fan pages or groups.
This may be a carryover from MySpace where a page was a page was a page. On Facebook there are three kinds of pages, personal pages for individuals, Groups for businesses or organizations, and Fan Pages for businesses, bands, famous people etc. Is it so hard to figure out what you are and use the appropriate page?

8. Thanks for the Follow! Direct messages.
Why? Seriously, why do you have to send me a message to thank me for following you? I clicked a button on the Internet. I probably forgot that I even did it. It's really not worth thanking me for it. It's really not worth sending me a direct message over it, especially a douchie spam message telling me to check out your site. If you do this, I suddenly forget why I followed you to begin with and un-follow, I might even block you. Thank me for that. 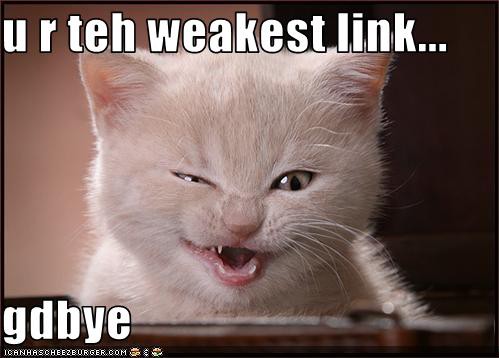 10. Spam
The scourge of the Internet. I've said it before, I'll say it again, like the cockroaches, someday after we're all gone spambots will still roam the earth. And really, isn't almost everything in the above list some form of spam?