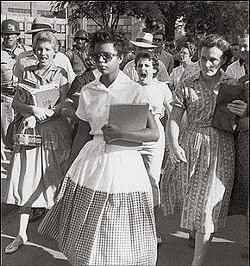 I just wrote a 1,000 word essay on the bizarre political rhetoric of the last few weeks.

But then I thought, why bother? You don't get attention these days via the printed word.

You get attention by arriving en masse outside a business or government building (preferably one that's not expecting you) and shouting your hatred for all the world to hear!

That's right. I'm talking a protest! And since the word "socialism" seems to bring out lots and lots of demonstrators, I'm planning to protest the biggest government give-away of them all: public schools.

Why should children get a free education? What do they do? They certainly don't pay taxes! Yet, do you realize the St. Louis Public School District relies on hundreds of millions of dollars of taxpayer money? And they use it to educate people for free!

I don't know where you come from, but here in the U.S.A. that sounds a lot like socialism.

Enough is enough. It's time to protest.

Let's send a message to little Johnny and Suzie, too. The free ride is over! Join me outside Adams Elementary School in the Forest Park Southeast Neighborhood (directions here) at 7:45 a.m. on Thursday to protest the first day of school.

If you don't have one of those cool "Don't Tread on Me" flags to bring, please make a sign of your own. Be sure to use the word "socialism" a lot. The word "Nazi"  also plays well on the television cameras.

Oh, and if no one has an Obama effigy, could someone please bring a teddy bear or two? I think the image of a stuffed toy burning at the stake would get our message across equally as well to lazy grade-schoolers.