Do They Have A Time Machine?

August 18, 2009 at 2:30 PM
comment
Last time we checked in on the saga of the San Luis Apartments in the Central West End, a St. Louis circuit court judge had just ruled that the Archdiocese could demolish the building to construct a parking lot and that local preservationist groups had no right to stop them.
Seems like a pretty clear cut case of game over, move on, time to pick a new building to save, right? Nope.
The "Friends of the San Luis," led by Ecology of Absence blogger Michael Allen, are hosting a benefit concert at Off Broadway later this month called "The Anti-Wrecking Ball" to raise money for legal fees and, presumably, to stop the demolition of their beloved "mid-century modern" building.
Umm, not to be the bearer of bad news or anything, but this is what the place looked like three weeks ago: 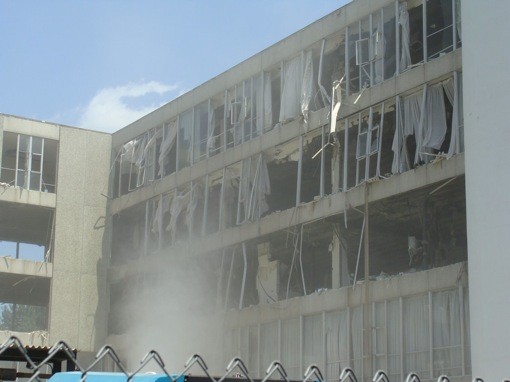 The east wing of the building looks like it's been bombed​
So what gives? Paying ten bucks to see local music and burlesque makes sense, but forking over the same amount of cash for a lost cause? In the words characters of the Twitter generation, WTF?
Turns out that the concert is not so much to stop the actual physical demolition of the building (the Archdiocese got a head start on that even before the judge issued his ruling), but to fund a prolonged legal battle to avoid setting a precedent that preservation groups have no right to intervene in the destruction of a historic building.
From the Ecology of Absence FAQ section (emphasis ours):

So, the building is gone and the case dismissed. Why are the Friends of the San Luis still fighting?

If left unchallenged, Judge Dierker's ruling could set case precedent that citizens and advocacy groups lack the right to appeal decisions of the Preservation Board. Since the Preservation Board and its enabling laws govern the entire city, all citizens are affected by the decisions of the Board and deserve the right to appeal on procedural grounds.

Why would the Friends of the San Luis care about the right to appeal? Didn't you want to save one building?

True, our organization was formed to advocate for a specific building. Yet our ability to do so was undercut by Dierker's decision. The members of the Friends of the San Luis are active in other preservation matters in which the right to appeal is essential. If people have to go to court to prove our right to participate on every matter, concerned citizens won't be able to actually fight for our city's historic buildings. We must legally clarify that right to protect citizen preservation advocacy.

The FAQ goes on to state that the preservationists are willing to take their fight all the way to the Missouri Supreme Court, if necessary. (Whether the court would hear the case is another issue entirely). Either way, The Friends of the San Luis are going to need more than a benefit concert (a bake sale, perhaps?) because their opponent, the Catholic Church, isn't exactly strapped for cash.