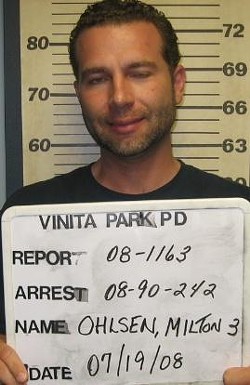 Last time I reported on Milton "Skip" Ohlsen was back in February when he'd just been indicted on gun charges and mortgage fraud. Back then, a source of mine hinted that Ohlsen might make news again on an unrelated matter but couldn't go into details.

Apparently what my source was alluding to made headlines this weekend. As Daily RFT reported Friday, Jefferson City was abuzz last week that state Sen. Jeff Smith (D - St. Louis) might resign from office.

On Sunday, the Post-Dispatch had more details about Smith's rumored resignation -- the result of a federal probe into his 2004 bid for Congress.

Smith lost that election to Russ Carnahan. Still, Carnahan's office filed a complaint against Smith's campaign accusing it of sending out anonymous postcards containing "false and malicious" information about Carnahan.

The Federal Election Commission investigation (viewable here) into the postcards reads like the Cliff Notes to "All the President's Men."  There is a mysterious political action committee funded by a member of the Busch family, throw-away cell phones, fake Social Security numbers and multiple aliases.

At the center of it all is Ohlsen, who was loosely associated with the Smith campaign and who provided FEC investigators with testimony they found to be "generally vague, contradictory and lacking credibility."

Eventually, in 2007, federal investigators determined that there was not enough evidence to prove Smith violated election law. Ohlsen, too, was cleared because the political committee, Voters for Truth, he allegedly formed to mail the postcards was not properly registered and had little paperwork to prove what contributions -- if any -- it had received.

Since then, Ohlsen has pleaded guilty to the aforementioned gun charges and mortgage fraud, and federal investigators have once again questioned Smith about his 2004 congressional campaign, according to the Post-Dispatch.

The 2004 congressional race was not Ohlsen's only foray into political work. In 2006 he helped strip-club operator Mike Ocello get elected to the Mehlville School Board. Ohlsen, 37, is said to have been so immersed in Democratic politics in the early 2000s that he was included on the email strings of many of Missouri's highest office holders.

Ohlsen also has had numerous brushes with the law. In 1996 he was sentenced to four years probation for "intent to distribute" cocaine. In 2007 his wife in Town & Country filed an order of protection against him claiming Ohlsen "physically restrained and choked me ... the choking was to where I could not breathe and [my] vision was starting to grey." In March 2008 police in Ladue pulled over Ohlsen in his black Ford Expedition and found him in possession of a stolen .40 caliber Glock.

Since 2007, Ohlsen has been busted on two other occassions for possessing firearms, which convicted felons -- such as he -- are prohibited from having. In May he pleaded guilty to the gun charges. He also pleaded guilty to to mortgage fraud.

Ohlsen was to be sentenced on August 11, but that date has been posponed.

A couple years ago Ohlsen tried being a fight promoter in the sport of mixed-martial arts. His production company, Genesis MMA, made a big initial splash but then collapsed when creditors, investors and employees claimed that Ohlsen owed them money. More recently, he flirted with entering the restaurant industry, but that, too, ended quickly.

The scuttlebutt now is that Ohlsen is being more forthcoming with investigators in an attempt to lessen his sentence. What he knows about Smith's campaign, may once again have the attracted federal attention.

More on this story as it develops.