August 17, 2009 at 1:07 AM
comment
When the Cardinals traded Chris Perez and a player to be named later to the Cleveland Indians for Mark DeRosa, I was happy to see them go out and get a player they had identified as a priority. DeRosa filled a huge need for the Cards with his ability to play third base and some outfield, as well as adding a much-needed right-handed bat to the lineup. Unfortunately, in acquiring DeRosa, I also thought John Mozeliak gave up entirely too much.
There were plenty of people who thought Jess Todd (the player to be named later in the deal), would, in fact, end up being the more painful piece of the deal, as he had put up outstanding numbers at every stop in his pro career. Meanwhile, Perez was looked at as something of an enigma, and many were jumping off his bandwagon due to persistent control issues.
Personally, I was much more upset by the loss of Perez than I was Jess Todd, who ended up being the PTBNL. I like Todd a lot; I like his delivery, his stuff, and most of all, his results. But Chris Perez I've always thought had the potential to be truly dominant, to be that overpowering endgame force teams so covet. Todd, on the other hand, probably falls a bit short of being closer material in the end, I think. I do, however, think he has the stuff and profile to be a top notch setup man, and I think the Indians may very well have one of the best late-inning combos in baseball for a while, all thanks to the Cards' hole at third. 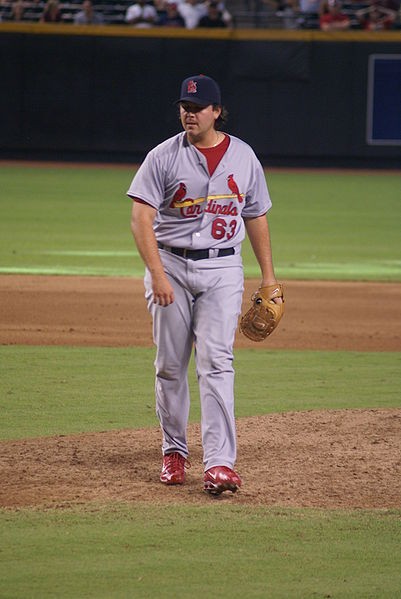 I did, however, have some questions about whether or not Perez was a good fit with this coaching staff; I wasn't at all impressed with their handling of him this season. There seemed to be some thought of trying to get Perez more on top of the ball, throwing downhill more, and staying more under control in his delivery. I thought that was the exact wrong approach to take with a pitcher like Perez, and I said as much on the first Future Redbirds Radio broadcast.
Since going to the Indians, Perez has been pitching extraordinarily well. His ERA stands at 3.86 in 14 innings, but that really tells only a fraction of the tale. His first appearance for Cleveland came on the 29th of June, just a day after joining the team, and it did not go well. Perez was hammered for four runs on two hits and a walk in just two thirds of an inning. He pitched again five days later against Oakland, and turned in a nice performance, giving up one hit in a scoreless inning. Four days later, he pitched against the White Sox, the team who had knocked him around in his Cleveland debut, and they did it to him again. Two thirds of an inning, two runs, three hits, including a double and a home run.
Since giving up those two runs on the 7th of July, Perez hasn't been scored upon. In that time, he has appeared in 11 games, covering 11 2/3 innings, and has allowed only three hits, while striking out 13. Best of all, Chris has managed to limit his walks, handing out only four free passes in that time frame. Control was always Perez's bugaboo; for now, at least, it looks as if he's found something that works.
Overall, the numbers for Perez since going to the Indians look like this: 14 games, 14 IP, 6 ER, 9 H, 5 BB, 15 K, 1 HR, 3.86 ERA, 3.42 FIP. He's striking out batters at a 27.3% clip, and is walking less than 10%. (9.3%) Not too shabby, particularly when we're looking at a Cardinal bullpen that has failed to perform up to expectations recently.
I am not saying the reason Chris Perez is pitching so well now is because he's away from Dave Duncan. Maybe I'm thinking it, just a little, way in the back of my mind, but I'm certainly not saying it. There's nowhere near enough evidence of what, if any, changes were made to Perez's mechanics, either on his own or on someone else's advice, and no real idea of what he's been working on or doing differently since going to Cleveland. Nonetheless, I think Perez may very well end up being an extremely interesting test case. He has immense talent, and the coaching staff here seemed at a loss to figure out how best to tap into that talent. Perez's breakout season came in 2008, after the Cardinals' new minor league pitching coordinator, Brent Strom, held an early spring minicamp for some of the brightest prospects in the Cardinal system. Strom pushed a natural approach, and encouraged Perez to return to the longer stride and more aggressive drive he had used in college. At the major league level, Dave Duncan pushed a controlled approach and encouraged Perez to get on top of the ball more, in order to create sinking action on the ball and force it down in the zone. I'm very interested to know what approach Perez is using now, and what counsel he has received from the Indians' pitching staff.
At the very least, we'll be able to decide finally whether the Cards were right or wrong in dealing Perez and keeping Jason Motte. Personally, I wish they had kept Perez, and so far, it's looking like they should have.
And no, I'm not planning on turning this into another Anthony Reyes Watch or anything; I just like to keep tabs on ex-Cardinals, see how they're doing, stuff like that. Plus, I think there are some good lessons to be learned from what the players you send away turn into.