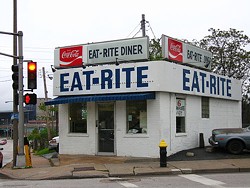 Police have identified the woman shot to death outside the Eat-Rite diner early Sunday night.

Shevette Chambers, 30, ate at the popular restaurant near Busch Stadium around 3 a.m. Sunday with a group of friends -- including her murderer.

When they departed the restaurant, the suspect's girlfriend arrived on the scene and an argument began.

After a few words between the girlfriend and Chambers, the suspect pulled a handgun from his waistband and fired several shots at Chambers.

Chambers was pronounced dead at a local hospital from gunshot woulds to the face, chest, abdomen and thigh. The 26-year-old suspect departed the scene in a white SUV and remains on the loose.