The Space Parlour CD Release Show 3 at Lemmons (Friday)
Nick Acquisto, host of "The Space Parlour" on KDHX (88.1 FM), has curated the Live in St. Louis Series, and the 2009 edition continues the tradition of showcasing the varied talents of our little 'burg. On Friday night at Lemmons (5800 Gravois Avenue), the Pat Sajak Assassins, Glass Teeth, N. Nomurai and Tory Z. Starbuck perform. Show-goers will receive a copy of the CD with admission, and all proceeds benefit KDHX. More details here.
- Christian Schaeffer

Drawn and Quartered at Luminary Center for the Arts (Friday & Saturday)
For their next performance of their ongoing Drawn & Quartered theatrical events, the actors of the Immediacy Theatre Project will present 35, two-minute long plays. Performances are at 8 p.m. Friday and Saturday (August 14 and 15) at the Luminary Center for the Arts (4900 Reber Place; 314-807-5984 or www.luminaryarts.com), and tickets are $7. More details here.
- Paul Friswold 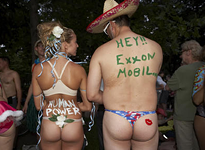 World Naked Bike Ride at Tower Grove Park (Saturday)
The St. Louis edition of the WNBR is back for a second year. You don't actually have to trade in your clothes, and nobody will give you a bike -- but as long as you're willing to ride a human-powered vehicle and you're comfortable in your own skin, you're welcome to join the cavalcade of nude and semi-nude people. Riders interested in protesting oil dependency and raising awareness of the cycling community should meet at 7 p.m. in Tower Grove Park (on the Arsenal Street and Grand Avenue side) for pre-ride body painting and other communal festivities. Riders depart at 9 p.m. (the full route is online at www.worldnakedbikeride.org), and the endpoint is once again the Atomic Cowboy. Participation in the ride is free -- as if the nudity didn't tip you off. More details here. See photos from last year.
- Paul Friswold

Let's Talk Baseball at St. Louis Public Library's Central Branch (Saturday)
If you're in a chatting mood Saturday at 3 p.m., head down to the Central branch of the St Louis Public Library (1301 Olive Street; 314-241-2288 or www.slpl.org) and Let's Talk Baseball. Dr. Gerald Early, Washington University's delightfully insightful essayist and baseball fan, leads a panel discussion about the history of African American baseball players from the years of the Negro Leagues to the present day and beyond. Dr. Ted Savage, who played with the Cardinals in 1965 and '66, is a member of the panel. Admission to the talk is free, as is admission to the library's Pride and Passion exhibit on the history of the Negro Leagues. More details here.
- Paul Friswold

Drag Show at Novak's (Saturday)
Each Saturday at Novak's Bar (4121 Manchester), there's a drag show at 9 p.m. This Saturday is no different for this 3 a.m. bar. More details here.

Playboy Party at F15teen (Saturday)
It seems there's a Playboy playmate in town every weekend these days, but why mess with a formula that works? This weekend it's Amber Campisi, of E! cable network fame and a 2005 Playboy playmate. F15teen nightclub (1900 Locust Street) hosts the party. It's $5 for ladies and $10 for guys before 11 p.m. Afterward it's $10 for everyone for the rest of night. Provocative flyer here.

Gentleman Auction House at the Chapel (Saturday)
Local favorites of the indie-pop scene play at the Chapel (6238 Alexander Drive, Clayton) for just $7. The show begins at 8 p.m. More details here.

New Belgium Urban Assault Ride After-Party at Forest Park (Sunday)
New Belgium Brewery sponsors the ride, which pits two-person teams against one another and against themselves. Riders will depart from Forest Park's Dwight Davis Tennis Center (5620 Grand Drive) and proceed to five checkpoints in whatever order they wish. At each checkpoint, the teams have to complete an obstacle course; past obstacles have included racing modified Big Wheels, bike jousting and something called "the keg walk." Once a team has hit and defeated all checkpoints, it's a race back to the starting point. More details here.
- Paul Friswold