Baseball Card of the Week: Because Sometimes, We All Need a Little Kuntz

August 14, 2009 at 1:21 PM
comment
Hey there, everybody! I know I haven't done one of these in a while, since it didn't seem to be all that popular a feature, but with all the talk recently of Topps' and MLB's exclusive deal and what it may mean to the future of the card collecting industry, I thought now might be a good time to dust the old girl off.
I actually bring you two things this week: one is a truly brilliant card sent to me by our web editor here at the RFT, Mr. Nick Lucchesi. Why is it brilliant? Because in the history of great baseball names, Rusty Kuntz may, in fact, have the greatest. Stubby Clapp gives him a bit of a run for his money, but Kuntz pulls it out in the end. (Can I get a That's What She Said?) 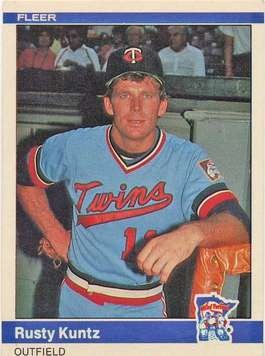 Here's Mr. Kuntz's Baseball Reference page; his career was certainly nothing to write home about, even if his name was. Something that is kind of cool: his B-R page is sponsored by Tirico Suave. Always good for a laugh. And a thought: how awesome would it be to be able to introduce yourself to everyone as Mr. Kuntz? I mean, honestly. That's like being Dr. Hugendonger.
The second thing I have for you is a very good article from Slate regarding the recent Topps contract, written by Dave Jamieson. Whereas I went for (mostly) mock outrage and wishing SuperAIDS on Michael Eisner (which I stand by, by the way), this guy actually knows what he's talking about. He's even written a fucking book! Published and everything! Wish somebody would give me a book deal, but no one seems interested in my idea, a little something I like to call The Caveman Erotique.
If anybody would like for me to return this to a regular feature, leave your comments below, and I'll see about doing so. If not, we'll always have Kuntz.