Where in St. Louis to Watch the USA-Mexico World Cup Qualifier Today 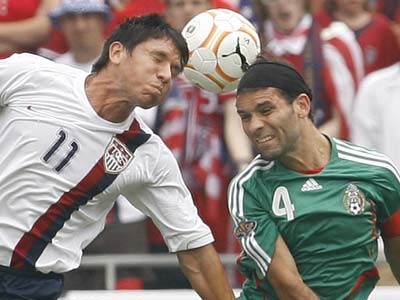 So you may have heard that the United States has never won a soccer match in Mexico. When the gringos visit Estadio Azteca (perhaps the most historic fútbol stadium in the world, not a chain restaurant) they are 0-18-1. Blame the crazy urine-chucking fans, blame the 7,000+ feet of elevation, blame the fact that all of America's best athletes play that other type of football -- whatever the culprit the Yanks haven't won nada south of the border.
Still, other than El Tri's half-Brazilian teen-dynamo Giovanni Dos Santos, the US has a significant advantage these days in the talent department. You can ignore that 5-0 spanking Mexico gave the Americans a few weeks back-- only one starter from the World Cup team was on the field. There was no Landon Donovan, no Gooch, no Tim Howard, and no Jozy Altidore-- all the European-trained studs that helped America routinely defeat Mexico in neutral territory.
Whatever the outcome, the key to enjoying a soccer match is a good pub with a large TV and an excitable crowd. So call in sick to work this afternoon and check out these places (for gringos and Mexicanos alike):
-The Amsterdam Tavern. Tower Grove's sweet new soccer bar. During the Gold Cup match a few weeks back there was one lonely Mexican man and a rowdy group of 50-something US supporters. Even when Mexico scored their third goal, sealed a victory, and silenced the American fans, the solitary Mexican barely made a peep. Even though his team won, I felt sorry for him.
-The Scottish Arms. Simply the best place to watch soccer in St. Louis.
- Carniceria Latino Americana. The Mexican markert/restaurant on Cherokee Street is partnering with neighboring soccer shop Gooolll! to have quite the fiesta for the match. Specials include $1 tacos $10 beer buckets. The match kicks off at 3 p.m. but pre-game jersey raffles and trivia start at 1 p.m. It would probably be a good (and safe) idea to wear green to this party. If you're American and just going for the cheap tacos, tell your friends it's to support Iranian protestors and you know nothing about soccer.
And now, enjoy the greatest moment in Estadio Azteca history: