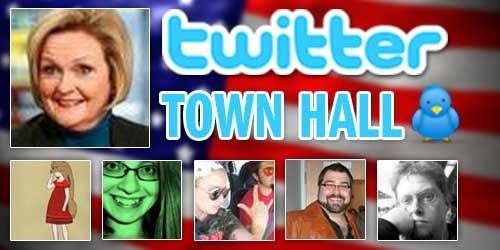 Senator Claire McCaskill held a town hall meeting on healthcare reform yesterday in Hillsboro. Oh sure, you could have watched it live on at least a couple of cable outlets. Or...if you were following the right people on Twitter, you could have read up-to-the-minute updates in (almost) real time.

Here are a few of the tweets from attendees. (Twitter-er's quoted here: Jaelithe, KBestOliver, ReadingMachine, EdReggi, and Clairecmc (who is Claire McCaskill herself):

KBestOliver: First question: how can private insurers compete with a gov't option.


KBestOliver: And some guy just tried to make this about abortion.


KBestOliver: Why does #clairemc have to explain that she doesn't vote on House bills? #hcr #m


KBestOliver: Raise your hand if you want to get rid of your Medicare? Go #clairemc


ReadingMachine: Watching the McCaskill Town Hall in rural MO. She is holding it down pretty well. Just brought up Medicare and it went over pretty well.


KBestOliver: Unreal. People are not letting her speak. Makes me want to cry.#hcr


EdReggi: Sen ClaireMc is doing her best but this town hall reminds me of Salem witch trials.


KBestOliver: Someone just asked if "illegals can take their coverage back to their homeland."


ReadingMachine: McCaskill keeps slapping down the shouters with her mommy voice. They deserve it.


KBestOliver: How many people here work for insurance companies? Feels like a convention based on crowd support.


EdReggi: @billpalmer And they all don't mind that Insurance companies are making Billions on our dimes


ReadingMachine: This crowd makes Missouri look like a bunch of assholes, booing @clairemc for stating that global warming is real.


KBestOliver: Oh shit. An assault. Not sure who started it.


ReadingMachine: What the hell just happened? Went away for a second and I come back to see a woman being dragged out. Anyone catch what happened?


KBestOliver: Seriously, the old white guys have had their say today. Sorry your unearned reign over earth's dominion is over, buds.


ReadingMachine: Man with a "don't tread on me" sign about to be tossed out at the @clairemc meeting. He probably has Medicare.


ReadingMachine: Sometimes @clairemc looks like she's thinking, "Oh, poor misinformed dears. Where do I start?" Way more sympathetic than I would be.


Jaelithe: @clairecmc has masterful command of The Mom Voice, I must say.


KBestOliver: @thinkc You'll have to read my blog post about it tomorrow. To be fair, there were plenty of respectful, well-mannered citizens there.


KBestOliver: @todderickv I was more bewildered by people's lack of consistency, logic, reason, and desire to actually get information.


EdReggi: Summary of todays Hillsboro #townhall meeting "angry people are going to need healthcare due to all their heart attacks!"


clairecmc: I've watched some of todays public forum, and I think at times I sounded condescending. My apologies for that.


Also I wanted to point out Unclepilot's series of Tweets that he dropped during the Town Hall event. I don't think he was actually there but he did add some fun color commentary:

Jesus. Anybody who says theatre is dead hasn't been keeping up with the news lately. I'm in the wrong business.

The show thread is that the Senator can't sing her song because she keeps getting interrupted by the songs of the crowd!

And then there's the scene where the Cons and The LIbs twitter at each other with the ferocity of the Sharks and The Jets.

I think UnclePilot and EdReggi need to team up and produce this show!