August 07, 2009 at 12:47 PM
comment
Over at the Columbia Daily Tribune, columnist T. J. Greaney has composed a strange tribute to Robert Bolivar DePugh, leader of an anti-Communist militia group (or a domestic terrorism cell, depending on your point of view) called the Minutemen. DePugh died June 30 in his basement apartment, beneath a storefront church, in Richmond, Missouri.

Why did DePugh deserve a tribute in the first place? Why, he was an unappreciated political thinker, of course! Read on, dear reader, for a sampling of his incomparable prose.

DePugh's literary medium was the sticker stuck to the walls of public places, like phone booths (remember those?) and bathrooms -- an unusual choice, but one perfectly equipped to serve his purposes: planting the seeds of conspiracy theories in the minds of his fellow Americans.


See that old man at the corner where you buy your papers? He may have a silencer equipped pistol under his coat. That fountain pen in the pocket of the insurance salesman that calls on you might be a cyanide gas gun. What about your milkman? Arsenic works slow but sure. ... Traitors, beware! Even now the crosshairs are on the back of your necks.

Superimposed on this was a picture of crosshairs. 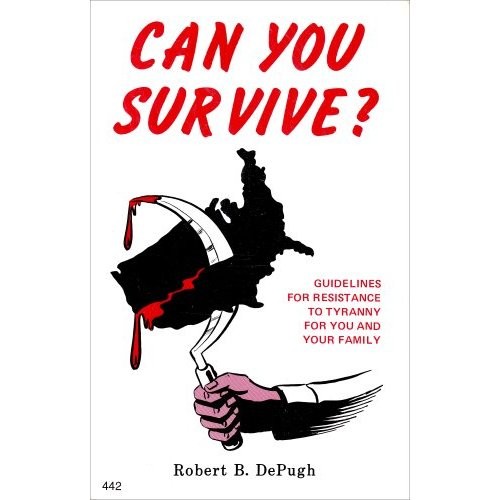 Before he turned vigilante, DePugh was the owner of Biolab Corp., a company that made its fortune manufacturing a vitamin meant to prolong the lives of dogs. The town of Norborne, Missouri, attracted by the promise of endless dog-vitamin wealth, convinced DePugh to move the company there in the late '50's.

Norborne, alas, became much more famous for being the headquarters of the Minutemen, DePugh's vigilante group. There DePugh manufactured his stickers, produced a monthly magazine called (what else?) On Target and horded a cache of guns and explosives. He published a list of "Communists", like Humphrey Bogart and Lucille Ball, and the names of 20 congressmen he wanted dead.

Writes Greaney, "His themes of self-reliance, ultra-patriotism and paranoid anti-communism struck a chord with people on the fringes." According to a Norborner named Eric Beckemeier, "He saw himself as the Paul Revere of the 20th century, that he was going to save the United States from Communism."

(No mention here of whether DePugh ever took a midnight ride, but maybe Beckemeier discusses the matter in his 2007 book about the Minutemen, a self-published work called Traitors Beware.)

And then it all went terribly, terribly wrong.Word of DePugh's weapons cache reached the Feds, and a few FBI agents infiltrated the group. (In Norborne. What a highly-coveted assignment that must have been.) Apparently, reports of the size of DePugh's army had been greatly exaggerated by the media, but, still, in 1967, DePugh was convicted of violating the National Firearms Act and fled to New Mexico.


From there on, his life more or less unraveled. In 1969, DePugh was caught in Truth or Consequences, N.M., after a massive manhunt. According to multiple reports, agents found him holding two former Minutemen -- a man and a woman -- in confinement crates because he believed they were traitors. He also had large stores of weapons. DePugh spent four years in federal prison and wrote a book about the plight of the incarcerated. Many consider it his best and most compassionate work.

During the late '60s, authorities tried to connect him to various other Minutemen exploits, including a bank robbery in Seattle and a planned cyanide attack on the United Nations, but they were unsuccessful. DePugh credibly said that he had no control over the people who were nominally his followers.

In later years, DePugh's political views evolved to what Beckemeier describes as "anti-Bush, pro-Obama and anti-Semitic, all at the same time. That's quite a combination." (Another commenter pooh-poohs this view: "Many Obama supporters are also anti-Bush and anti-Semitic, notably Farrakhan and Wright.")

What makes Greaney's tribute particularly strange is its tone of admiration, even compassion, for DePugh. He appears to find some poignancy in the fact that DePugh lived alone, abandoned by his wife and children. Come on, T. J., never mind political views, would you feel comfortable living with a convicted felon and possible child-pornographer?

The death of the man who had appeared on the front page of the New York Times and whose shadow army made elected officials quake in fear warranted almost no media coverage. A scant two-line obituary ran in the Kansas City Star. The obit misspelled his middle name.

Could the misspelling speak just as much to a general ignorance of South American history and lack of good copy-editing as well as disrespect for DePugh? A more philosophical question: Does someone like that deserve any respect?

In any case, since DePugh, per his own request, had no funeral, here's hoping somebody affixed one of DePugh's stickers to his cremains urn.