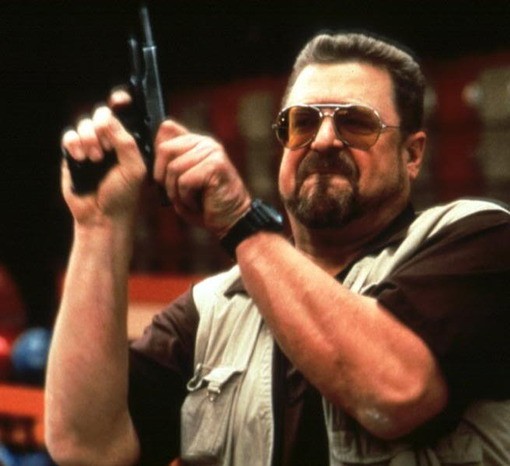 The Big Lebowski is one of the funniest movies ever made. It's also, as Paul Friswold pointed out in this week's calendar section, one of the most quotable. It's no coincidence, then, that the film contains a shit ton of swearing. The cursing, as anyone who has ever proclaimed "Fuck it dude, let's go bowling" can attest, is essential to the humor.
That's why not many people were laughing at last night's outdoor screening of The Big Lebowski at the Old Post Office Plaza. Rather than play the R-rated theatrical release of the film, the good folks at Frontyard Features opted for the super-censored kid-friendly cut of the film.
Not cool, dudes.
It wasn't just that a few choice words were dubbed-over. That was hilarious in its own right ("This is what happens when you find a stranger in the Alps, Larry!"). No, it's that entire scenes were edited out of the film. As a result, nobody was fuckin' with the Jesus last night, because John Tuturro never appeared on screen.
While no one seemed too disappointed that they got to go home 20 minutes earlier than expected, a few people were peeved that the order of events was highly altered because of the omissions. Why were Donnie's ashes in a coffee can? We'll never know because there was no mortuary scene. Even worse, during some of the remaining vaguely racy moments, the sound was turned way down so no one could hear what was going on, drawing boos on several occasions.
While there's probably an explanation for going with the censored version, it doesn't make up for the fact no one was told ahead of time that it was going to be a PG-rated cut. Sure you want to be kid-friendly, but any parents bringing their tots along to The Big Lebowski ought to know what they're getting into.
Frontyard Features is a fantastic idea and one of the coolest things going in St. Louis. The beautifully remodeled Old Post Office was a perfect setting for an outdoor film. But, despite all that, last night's event was a letdown of Walter Sobchak-sized proportions.

Update (thanks Tom and Ian):