There's an interesting article in Salon today about a new book called Cahokia: Ancient America's Great City on the Mississippi by an archaeologist named Timothy Pauketat.  Three guesses what it's about, and the last two don't count.

According to Pauketat, Cahokia wasn't just a random collection of mounds but, rather, at least in the twelfth century, a city of 20,000 people, the largest in what is now the United States. (It would take 600 years for another U.S. city to surpass it. That would be colonial Philadelphia.) Its suburbs -- of sorts -- stretched across the river, a nice twist on the modern St. Louis/East St. Louis divide.

About two-thirds of Cahokia's original 120 mounds still exist. Earlier archaeologists hypothesized that such an impressive city could not possibly have been built by Native Americans -- the most obvious candidates -- and must have been constructed by a mysterious, now-defunct tribe of people of European or African origin known as the "Mound Builders" or even visitors from outer space. (This was a popular theory about Mayan and Incan ruins as well.)

But Pauketat has definitive proof that the ancient Cahokians were indeed human beings, in the form of Mound 72.

Let's get to the good stuff now, shall we?

As Andrew O'Hehrir writes in the Salon article:


Some archaeologists might pussyfoot around this question more than Pauketat does, but it also seems clear that political and religious power in Cahokia revolved around another ancient tradition. Cahokians performed human sacrifice, as part of some kind of theatrical, community-wide ceremony, on a startlingly large scale unknown in North America above the valley of Mexico. Simultaneous burials of as many as 53 young women (quite possibly selected for their beauty) have been uncovered beneath Cahokia's mounds, and in some cases victims were evidently clubbed to death on the edge of a burial pit, and then fell into it. A few of them weren't dead yet when they went into the pit -- skeletons have been found with their phalanges, or finger bones, digging into the layer of sand beneath them.

These women, Pauketat hypothesizes, came from mostly-female agrarian villages surrounding Cahokia. (Which raises even more questions, most notably, Where did all the men go?)

Further investigation into the contents of Mound 72 revealed more corpses, 250 in all, including some men. At the very top of the pile were two men, one wrapped in a beaded cloak in the shape of a thunderbird. It's not clear exactly who he was, but all signs point to him being a Very Important Cahokian, and that the other bodies were somehow related to him and his cohort. 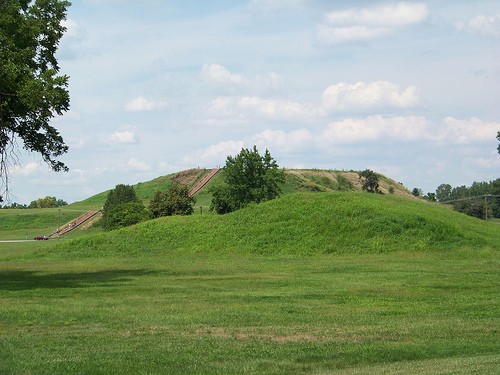 Pauketat believes that the Cahokians were as decadent as they were violent. In the 1960s, archaeologists discovered a 900-year-old garbage pit so deeply buried that it still stank.


The garbage dump reveals the remains of enormous Cahokian festivals, involving as many as 3,900 slaughtered deer, 7,900 earthenware pots, and vast amounts of pumpkins, corn, porridge, nuts and berries. There was enough food to feed all of Cahokia at once, and enough potent native tobacco -- a million charred seeds at a time -- to give the whole city a  near-hallucinogenic nicotine buzz.

All this, Pauketat thinks, was the detritus of an enormous festival to honor the royal family or celebrate the coronation of a new king. It's unclear whether the sacrificial virgins played any part in these celebrations, but Pauketat writes that they were at least part of the same "social system."

The peak of the Cahokian civilization lasted nearly 150 years. Unfortunately, the Cahokians left no written records, so it's up to archaeologists like Pauketat (who's on the anthropology faculty at the University of Illinois) to piece together what happened, not to mention the religious rituals that called for human sacrifices.

In the meantime, Pauketat's work has added a new veneer of glamour to good old Cahokia. Call it Cancún on the Mississippi. Now just add some beaches, some fruity umbrella drinks, maybe some parasailing, and we'll be in business.