Developer Has Big Goaaal! in Mind in Richmond Heights 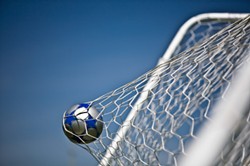 The 18,000-seat stadium and related development would sit south of Highway 40 and east of Hanley Road on the land that was to house the failed Hadley Township Redevelopment.

The stadium is endorsed by Metro East attorney Jeff Cooper, who's trying to bring a professional soccer team to St. Louis.

Richmond Heights received the proposal in May in response to a request for proposals to develop the neighborhood -- much of which has been blighted through eminent domain. The soccer stadium was the only proposal the city received.