Jaime Garcia On the Comeback Trail 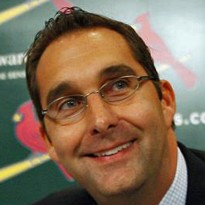 One of the Cardinals' best pitching prospects - probably the best, actually, at least until Shelby Miller signs - took another step last night in his attempt to return from Tommy John surgery.

Jaime Garcia pitched in a rehab outing last night for the Palm Beach Cardinals, throwing three scoreless innings and giving up only two hits while striking out five. Best of all, he didn't walk a batter.
What's really interesting about this whole thing is the fact that both John Mozeliak and Jeff Luhnow were on-hand for the game, with Luhnow posting updates via Twitter. According to Luhnow, Garcia was hitting 92 mph pretty consistently with his fastball, which is frankly outstanding for a pitcher's second outing of a rehab assignment.
The reason I find it curious, and really fascinating, that both Mozeliak and Luhnow were there is because if Mozeliak himself actually took the time to fly to Florida and watch this game, that suggests to me the Cardinals see Garcia as a legitimate option to contribute at the big league level sometime down the stretch this year.

The left side of the bullpen has actually been one of the stronger facets of the team this season, but Garcia would likely be more of a middle reliever than a lefty specialist. In that role, he could certainly have an impact, as the Cards have struggled with bridging the gap to Ryan Franklin this season, particularly since the trade of Chris Perez and the collapse of Josh Kinney.
I for one am really excited to see Garcia on his way back; I thought he had a chance to be a pretty special pitcher before his injury. There are some questions about his delivery; he seems to have a timing issue at the back of his arm action, and I hope maybe the coaching staff used the rehab process as an opportunity to work on cleaning that up if at all possible.
Certainly a name worth watching as he tries to work his way back to St. Louis.