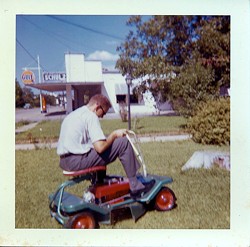 Yes, the corn is getting high. The cicadas are singing. And rednecks are fueling up on booze and mounting their lawn tractors. Must be socks-and-sandals weather in Missouri.

As if on cue, yesterday the Joplin Globe in southwestern Missouri reported that police in nearby Carterville arrested a man Friday for driving his lawnmower drunk down the highway.

The accused, 47-year-old James Dennis, was hauled into the station where he blew a .094 Breathalyzer score (.08 is the legal blood-alcohol limit to operate a motorized vehicle in Missouri.)

Carterville police chief William Cline confirmed to the Globe that the arrest was not all that unusual. "It's fairly common for people who have been revoked or have a DWI (on their record)," he said. "If they have to run to the store, they'll hop on a mower thinking that's all right."

Reminds us of our favorite drunk lawnmower yarn of recent years...

That incident occurred last October in the little town of Iron Mountain Lake in eastern Missouri.

Police got a call about a man who'd created a disturbance. When they got to his home, police found the suspect driving down the street on his lawnmower towing a trailer full of beer. On his body was a flask and his blood-alcohol level registered a whopping .115.

Of course, then there's this famous (and somewhat dubious) video from southern Louisiana -- suggesting that drunk lawnmower riding may be more than a Missouri phenomenon.