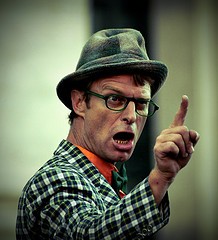 Because comments from you, dear readers, tend to get buried pretty quickly on this here blog, we thought it would be fun to highlight a few of our favorite responses for the week.

1. A post questioning the need for the last phrase in the headline, "Missouri Teen Dies After Lying in Road, Getting Run Over," got this reply from JLK: Nah, the last part of that headline was definitely 'overkill'! Oh man. Now I'm going to hell.

2. The post titled Orphans Call Ophan Slasher-Flick "Offensive" generated this response from Craig Mayhem: I am a hockey-masked psycho-killer and I am greatly offended at Friday the 13th movies.

3. In response to a post speculating as to what type of beer President Obama would serve at the White House, Karl wrote: Perhaps Schlafly should send a case for the occasion...

4. A video we posted on Phillies fans shining a laser pointer into the eyes of Cardinals batters, got this comment from Steveee: They should find out who did this using video from the game and arrest him and charge him for assault. You can permanently injure someone's eyes with a laser pointer. (and I'm a Phillies fan)

5. A follow-up post reporting how Phillies fans beat a man to death in the stadium's parking last weekend and linking to several videos of other fights inside the ballpark, received this reply from another Phillies' fan, J: That first fight you linked to in Citizens park was instigated by a douchebag Orioles fan. The rest, well, what do you expect, it's Philly. Whatever. Still world champions and poised to do it again.

6. The eminent Dean had this to say about a post on blogger Dana Loesch and her St. Louis Tea Party: Like most hott conservative talking heads (Sarah Palin, Michelle Malkin, Elizabeth Hasselbeck, etc), Dana is alright until she opens her mouth. To her credit she's not quite as crazy as the rest, but nonetheless I suggest experiencing her only in picture form, or just mute the video. All the positives, none of the negatives. btw, nice curls ;)