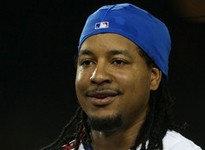 I would be remiss if I didn't at least mention the reception of one Manfred Ramirez. (I wish his name really were Manfred. That would be awesome.) Manny was, of course, quite roundly booed every time up in last night's game between the Cardinals and Dodgers, and really, I don't think anyone expected anything less.
Personally, I didn't have a problem with booing Manny, but then again, I don't have a problem with booing any opposing player. (Or players on your own team, really, but that's a separate issue entirely.) Let's face it: Manny Ramirez is not a particularly popular player in quite a few places, and with good reason. He quit on his team in Boston, got into fight with an old man, takes bathroom breaks in historic landmarks, has just godawful hair, and he's probably going to beat your team with a clutch hit at least once before any given series is over. Plenty of reasons not to like Manny.
But, of course, we all know that isn't the reason Manny was being booed. Manny was being booed because he is a Steroid User. Me, I hate that steroids have become such a huge part of the game. When people try to compare 'roids to what Pete Rose did, I always argue steroids are just as bad as gambling. In neither case can you trust the results of the contest on the field, and that's really the issue with the gambling, isn't it? That you have to wonder if what you just saw was legitimate? Well, I feel the same way about PED's. Was the contest I just witnessed legitimate, or was it a case of unequal footing, because some players are cheating and others aren't?
Nonetheless, I did find it a bit curious to hear how vehemently Manny was booed, yet no one really ever mentions Ryan Franklin tested positive and was suspended for steroids. Plenty of people in this town hate Mark McGwire, but I would hazard to say most would love to have him more visible as a face of the Cardinal franchise. I know I would; the guy obviously knows his way around a batting cage, bull shark testosterone injections or no, and I think he would be leaps and bounds better as a hitting coach than Hal McRae. Does it hurt me to know the magic summer of '98 wasn't what I thought it was? Yeah, it does. But it was still amazing, and I can't judge one man so harshly for the sins of an era.
Or what about the Golden Boy himself, the man they call Swingin' Dick? Remember how he was found to have illegally purchased human growth hormone? But hey, we still love that guy! Somehow, Rick Ankiel can do no wrong in this town, but we're perfectly willing to boo the shit out of some other team's pharmaceutical rep.
I would like to think that we were all booing Manny because he's kind of a jackass. That he was getting those huge rounds of boos because he's basically the class clown from junior high, the one who liked to snap girls' bra straps and make farting noises in the middle of the teacher's sentences, only somehow Manny is still that guy in his late 30s, getting away with all the crap he does because he can hit a baseball like very few people on earth. Unfortunately, I can't really convince myself of that. Is Manny's behavior a part of the reason he was booed last night? Yeah, probably. But most of it, I'm sure, was because Manny is the longest in a long line of steroid cheats, and baseball fans just hate those guys.
We here in St. Louis should probably be a bit careful tossing stones around, though; glass houses and all that. Tony La Russa has had his name come up in steroid discussions more than any other manager in baseball. In fact, La Russa's whole staff was together out in Oakland during the late 80s and early 90s, when Jose Canseco was busy turning himself into Johnny Bravo. The Great Home Run Chase, played out here and in Chicago, is the greatest symbol of baseball's broken trust with the fans, tainted as it is. And right now, the Cardinals have no less than three known users of PEDs on the 40 man roster. (Troy Glaus, Franklin, and Ankiel.) Maybe we should be booing those guys when they come to the plate.
Of course, I'm no better. I hate Barry Bonds, but forgave McGwire a long time ago. I find myself hoping Roger Clemens and Rafael Palmeiro and Sammy Sosa never, ever get into the Hall of Fame, yet rooting like crazy for our own steroid guys to do well.
In the end, as much as I hate to admit it, I think it really does come down to whether or not it's your guy. Players on other teams are cheaters, players on your team made a mistake. I wish I could say that weren't the case, but I'm afraid it probably is.
Will that stop me from booing Manny? No. But maybe we should all take a little closer look at why we feel the way we do.