Homeless Soccer Players to Return to National Tournament This Week 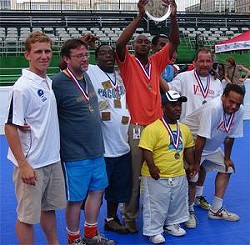 Last year we told you about the St. Louis Roadies, a soccer team headed by Keith Deisner, director of development at Peter & Paul Community Services in Soulard.

For the most part, The Roadies look like a run-of-the-mill group of recreational soccer players. But one thing makes them different. All the players on the team are homeless.

Last July the team traveled to Washington D.C. to participate in the Homeless USA Cup where they took third place in the beginners' division and captured the Fair Play Award Fair for ''showing the best in human spirit and embodying what the tournament is all about.''

Now the team is set to depart for its second trip to the tournament. They'll leave this week for Washington where they hope to improve on last year's mark.