After Shooting Laser at Cardinals, Phillies Fans Beat to Death One of Their Own 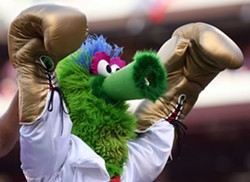 We here at Daily RFT unwittingly entered a war of words a few weeks ago with fans of the Philadelphia Phillies.

The battle began innocently enough when we defended a Cardinals fan ridiculed by a blogger in Philadelphia. Our response to that blog generated dozens of comments from angry Phillies fans questioning our journalistic integrity and telling us -- in no uncertain terms -- what we could suck.

We thought we'd end it there. No sense in elevating a fight with a city known for having the absolute worst sports fans in the country. (See Eagles fans booing Santa Claus and Phillies fans throwing batteries at J.D. Drew for additional examples of hooliganism in the "City of Brotherly Love."

But then this weekend the Cardinals traveled to Philadelphia to take on the Phillies. Despite their team leading by a score of 8 to 4 in the 7th inning Saturday, a Phillies fan in the seats started beaming a laser pointer into the eyes of Cardinals players as they took their at-bat. This unsportsmanlike action caused officials to delay the game for 10 minutes as they searched the stands unsuccessfully for the offender.

As you might expect, no Phillies fan was willing to give up the perpetrator. In fact, when we later blogged about the incident, Phillies fans crawled out of the woodwork to defend the fan's action and poke fun at Missouri for being a back-water state. (As though laser technology has yet to arrive here.)

But then, Phillies fans don't reserve their hatred solely for fans of other teams. They'll fight anyone, including their own. So, we were hardly surprised then to read that after Saturday's game a group of Phillies fans beat to death a man in the parking lot of the stadium.

The fight began in a bar attached to Citizens Bank Park before spilling out into the parking lot. That's where 22-year-old David Sale died of multiple hits and kicks to the head.

And if you think this is an isolated incident, check out the this incredible link to several videos of Phillies fans in fights in (or near) the ballpark.