July 24, 2009 at 11:34 AM
comment
Thanks to a Jim Edmonds-worthy catch in the ninth inning by White Sox centerfielder DeWayne Wise, St. Charles native (and Francis Howell North High School-alum) Mark Buehrle pitched the 18th perfect game in Major League Baseball history yesterday afternoon.
Now Buehrle is basking in the glory of perfection and receiving congratulatory phone calls from Sox-loving President Obama. What he really needs to celebrate, though, is a parade through the streets of his hometown in his monstrous custom Ford truck.
Behold the beast: 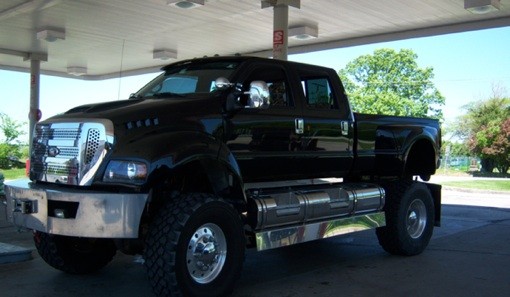 According to the site that first unearthed the pics of Buehrle's monster, the truck is a "2007 Ford F-650 Dominator." It weighs over six tons and stands ten feet tall, though hydraulics have been added so the bed can be lowered to the ground. Remarked Buehrle upon first seeing his new toy "Oh [bleep] that thing's a lot bigger than I expected."