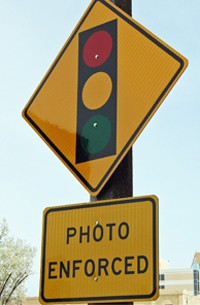 It's been several months since I last wrote about red-light cameras. Frankly, I was a bit bored with the subject. Still am.

Yes, tickets from the cameras can seem a bit unfair (especially when you're unaware you even ran a light or, worse, turned right on red). And, yes, the cameras seem to be little more than a revenue generator for cities.

But there is something you can do about them. You don't have to pay the tickets.

As I've written on numerous occasions, most municipalities will do nothing if you choose to simply ignore the them. That's how it is in St. Louis and how it's also been in Arnold -- at least up until now.

Arnold Mayor Ron Counts hopes people will start paying the tickets in his town after a federal judge yesterday dismissed a lawsuit challenging the constitutionally of the cameras.

The suit, filed by noted defense attorney Chet Pleban, alleged that Arnold and the camera-firm American Traffic Solutions violated civil rights and attempted to collect fines through fraud and extortion.

In his 48-page opinion yesterday U.S. Magistrate Judge Thomas Mummert III ruled the suit didn't prove the cameras violate federal laws. He also noted that because the tickets are treated as a civil matter (ie. no points are assessed to your license) the claims of Pleban's plaintiffs became moot.

In response, Pleban told the Post-Dispatch: "Big government and big brother wins again. What a surprise."

The Arnold mayor, meanwhile, says he hopes red-light scofflaws who've been waiting the outcome of the lawsuit will now send the city its $100 fee.

But does the city have any legal recourse -- such as issuing warrants -- to collect on those tickets? Or, like St. Louis, does it hope that a few scary collections letters might compel people to pay up?

Those questions remain to be answered.