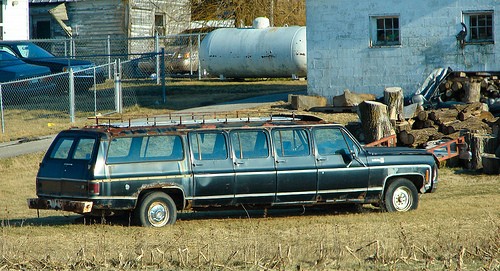 What is a redneck limousine, you ask? Well, it's anything looking remotely like the vehicle pictured above.

It's when you have your friends and their dog pile into the backseat of your auto while you throw the kids in the trunk.

That's what a duo from Lebanon, Missouri, did last week. We'll let the police explain the rest of the details in the following press release sent out today.

On Thursday, July 16th at approx. 3:45 PM Officers with the Camdenton Police Department received information of a vehicle traveling in the area that had small children being transported in the truck of the car.  Police located and stopped the vehicle shortly after receiving the information and met with the driver.

The driver was identified as 21 year old Cindy C. Feltner of Lebanon, MO.   Feltner denied that there was anyone in the trunk.  Police observed four other persons in the vehicle and a dog.  Upon hearing a muffled noise coming from the trunk, the Officer asked the driver to open the trunk and found that three juvenile males were in the trunk.

Police found that Feltner and an adult male identified as 18 year old Dustin A. McDonald of Lebanon, Mo had told the three boys to get into the trunk after they had been swimming to be transported back to Lebanon.  Police noted that the temperature was 82 degrees and very muggy.  There was no access to the trunk from the backseat, making it a sealed compartment.

Both subjects were arrested and charged with Class C Felony Child Endangerment with bond set at $5,000.00 cash or surety.