Post-Dispatch to MLB: Can We Have the All-Star Game in St. Louis Every Year? Please!! 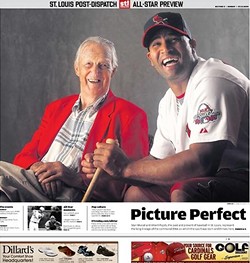 The All-Star Game was very kind to the hometown daily. The media-focused magazine Editor & Publisher yesterday reported that the Post-Dispatch increased its press run by 20,000 copies today and yesterday based on demand for its All-Star Game coverage.

And the daily's website has seen even bigger gains. Post-Dispatch editor Arnie Robbins tells E&P that Stltoday.com had a record 2.7 million page views on Monday -- its highest one-day total since launching in the mid-1990s.

The site reached its record of 2.55 million a year ago -- July 20, 2008 -- when InBev completed its purchase of Anheuser-Busch and a Maplewood firefighter was gunned down.