Juan Uribe Should be Ashamed of Himself

July 11, 2009 at 12:32 PM
comment
Jonathan Sanchez threw the first no-hitter of 2009 last night in San Francisco. It was an achingly beautiful performance, ten strikeouts, no walks. ESPN cut to the game during Baseball Tonight, so that anyone watching at the right time got to see Sanchez make history.
In short, it was a magical night. Unfortunately, there are two players involved that should feel awful about themselves this morning.
The first is Juan Uribe, the Giants' third baseman. With one out in the eighth inning, Uribe botched a routine grounder off the bat of Chase Headley. Sure, it was a bit of a tricky hop, but you've got to make that play when your pitcher is throwing a perfect game. That's right, the only thing that kept Jonathan Sanchez from a perfect, 27 up, 27 down game was an error on a fucking groundball.
I'm sorry; I know you're not supposed to call out teammates and all, but if I'm Sanchez, not only am I calling Uribe out, I'm going to drag him to the post-game news conference, introduce him as, "The guy that cost me my perfecto," and then encourage all the reporters in attendance to pelt him with rotten fruit.
There have only been seventeen perfect games in Major League history. You know how many no-hitters there have been? Neither do I. Because it's a lot. So yeah, sure, it's awesome to have thrown a no-no, but Sanchez had a chance to be number eighteen, and lost it due to his third baseman's iron glove. That's just, just, I don't know what. It's fucked up, I'll tell you that much.
Oh, and Everth Cabrera, the dude trying to bunt in the ninth inning, then arguing about the third strike? He should be right up there next to Uribe, covered in refuse. One, you never, ever, ever fucking bunt to break up a no-hitter. Not cool. I know the old rule dictating you not talk about a no-hitter is broken pretty regularly now, by broadcasters and everyone else under the sun, but there are still some rules you need to know. And you don't bunt to try and break up a no-no. You take your swings and try to get on honestly. That's bullshit right there. And then arguing about the called third strike? The hell, man?
The Padres were down 8-0. That's eight runs for the Giants and zero for the Padres. In other words, it wasn't exactly a nail-biter. And this douchebag is going to bitch about one borderline strike call in a no-hitter? Honestly, I had never heard of Everth Cabrera before last night, but he may now be my least favorite ballplayer on the face of the earth. When a guy does something that special, you don't throw a fit over a strike call. You tip your cap to him, think to yourself, "Yeah, maybe it was a little out of the zone, but he earned it," and you go sit down. You don't argue with the umpire and make a spectacle of yourself. Seriously, man, no one fucking cares about you. They care about the guy on the mound. Get over it. 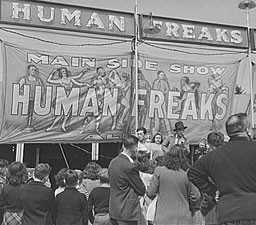 So I'm proposing we all pack up, head out to the coast, find these two sumbitches, and turn 'em into a good old fashioned geek show. Put 'em both in cages, advertise Uribe as, "The Stone Handed Man, Nature's Cruelest Mistake," and Cabrera as, "El Doucho Grande, the Only Man Who Makes Ryan Braun Look Like a Pretty Okay Guy!" We'll charge two bits a gander to look at them, they'll get what's coming to them, and we'll all get rich.
Now, who's with me?