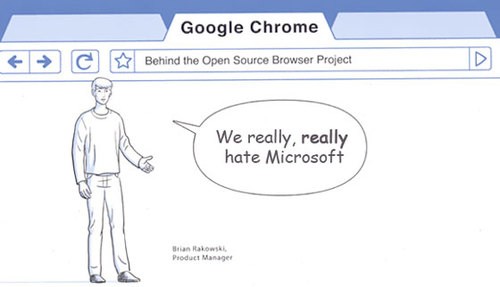 Okay, in some ways this makes some sense. Think about it. How much time do you spend actually working on your computer versus how much time you spend working on the web these days? For a lot of people, the things they do on their computers are almost all web based: email, document creation, document sharing, web browsing, chatting etc. And if you're not doing all that on the web now, you could be doing it with Google Docs, Google Spreadsheets, Gmail, and Picasa.

The idea behind Google Chrome OS is to give you the bare minimum to get your computer up and running and into the browser where you do everything anyway. It makes your computer into something like one of those old dumb terminals that are really just a remote interface to a larger more expensive machine somewhere else. Wait ... is that a step forwards or backwards?
Google Chrome really is just a stripped down version of Linux with the Chrome browser running on it. And the Chrome browser is just a version of the open source Webkit (which is also the basis for Apple's Safari Web browser). So what it boils down to is a new implementation of Linux that's light enough to run on low-powered hardware like netbooks so you can do all your Facebooking and Twittering on something smaller than a laptop but bigger than a phone. Yeah.
Will this kill Windows or even the Mac OS? Probably not any time soon. Business users will find Google's Office suite pretty lackluster compared to the desktop versions they've been using for years. And if you do any heavy work on your computer that requires a beefy processor, like say, multimedia production -- video, audio and photo work -- web apps REALLY aren't going to cut it.
Google Chrome OS is still in development and won't be widely available until late 2010. A lot can change between now and then ... including a copycat move by Microsoft.