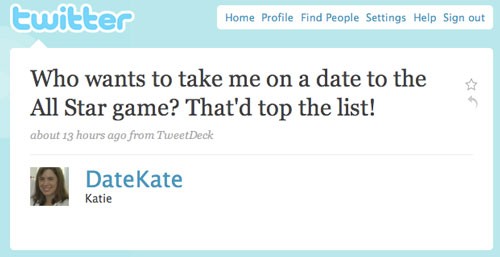 People are finding all kinds of new uses for Twitter. Some ideas are better than others. Finding breaking news is an obvious use for it, as is finding like-minded people who are into certain niches. Other people have tried writing novels on it, 140 characters at a time. And of course there is all the business networking and job hunting that goes on. But what about dating?

Oh sure, it happens in informal ways, the way it happens anywhere else where people congregate. But two local women, Laura and Katie (last names withheld by request) came up with an idea to use it only for that purpose. They call it, get this, "Twating" which follows the common and soon to be annoying trend of adding TW to the spelling of anything you do on Twitter. Katie is a busy medical student who doesn't have a ton of time to date. And "Twating" was Laura's solution to finding dates for her.
I was curious as to how this came about and how it's working out for them, so I asked them some questions via email:
So what are you doing on Twitter again?
My friend Laura and I were talking about a social media club "tweetup" she attended when Laura (@stlstude) suddenly became very excited and started yelling "DateKate, DateKate! You should join Twitter, and that can be your username! Since you're so busy, you can try Twitter dating!"  Somehow she convinced me to be her test subject to see if Twitter could function as a free dating service. Since I'm so busy, she set it up and forwards me anything good.  I don't even know the password! I think she's got a new business in the making.
Have you found many dates yet?
Not yet, like I said I'm kind of at the mercy of Laura. I think she's still trying to build my followers and get the word out about this experiment. I'm still not even sure how I really feel about Twitter, much less using it as a dating service. But hey, if I meet a cool guy, I won't complain.
Have you had a lot of creepy dudes contacting or following you?
No one stalker-ish or anything, thank goodness.  But a lot of dating sites follow me, and they sometimes send me strange messages.  At this point, most people that contact me wish me luck or just thank me for following them.
Have you tried finding dates on other sites -- dating sites or others?
No.  I've heard stories about some weirdos my friends have found on dating sites.  Plus, they're really expensive.  I have other things I should be spending my money on.  Like paying back med school loans!
What should potential suiters know about you?
That I'm really busy with school.  It is difficult to have a normal dating routine because my schedule is so crazy, so I would probably be best suited for someone who is in a similar profession or at least understands mine.  Oh, and I tend to be attracted to the smart, athletic type!
Would you be offended if someone twittered during a date?
Definitely!  Especially if their tweet read, "On a date with a girl I met through Twitter.  Want to get out of here NOW!"  But twittering on a date is equivalent to sending a text or answering a call, so I think it would be a little rude.  At least go to the bathroom to do it!
Do you Google your dates?
Yes.  And Facebook them, too. Hey, you have to make sure they're legit!  Especially if you're doing things kind of "blindly" like I am.
Is there anything you've learned from this experience that you might want to pass along to others thinking about trying this?
At this stage, this is more of an experiment to see if Twating (Laura's term for Twitter dating) catches on. If I start getting a lot of interest, I may pursue it more seriously and have some better advice. I guess my only advice at this point is to not be afraid of putting yourself out there.  That was my concern at first, but Laura convinced me it is totally acceptable in today's society to do this kind of thing. If you are still hesitant, talk to one of your friends who is persuasive, persistent and willing to act as your social media consultant!