What If You Threw the LARGEST TWEET UP IN ST. LOUIS and No One Showed Up? 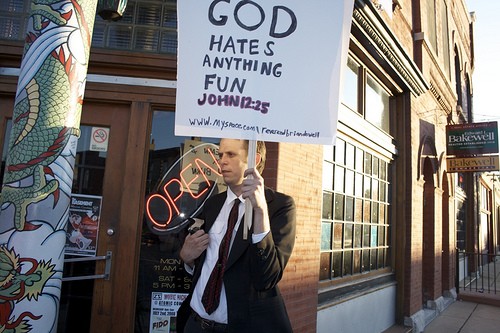 A few weeks ago a local Twitter user, Rex Gradeless (Rex7) and non-local Twitterer Brandon Prebynski (Prebynski) of Indianapolis began promoting what they billed as the "St. Louis Largest Tweet-up Ever!" which was to happen last Friday at McGurk's in Soulard. Well, by all accounts it wasn't. I wasn't able to attend myself but, Todd Jordan (Tojosan if you're nasty) did, and he reported that there were about 19 people in attendance, not nearly the crowd the Social Media Club got in May, or the fifty or so Twitterers at the Royale Tweetup in the spring.
The turnout was especially disappointing since both Gradeless and Prebynski have thousands and thousands of followers on Twitter. Gradeless has over 60,000 followers all by himself. You would think that a twitterer that influential should be able to attract more than 19 people to a tweetup right? What could have possibly have gone wrong? I asked Gradeless how the Tweetup went via Direct Message and at the time of this writing I haven't heard back. But I have a suspicion as to why his vast twitter following was mostly absent from this event ... most of his followers are fake.
How does one fake that many followers? Do a search for something like "get more Twitter followers" and you'll get results from a lot of snake-oil salesmen trying to sell you their schemes for pumping up your follower counts. The problem with using those tactics is that most the followers you get will be spammers. All of the schemes basically boil down to doing everything you can to attract the thousands of spam accounts on Twitter. Most of these spam accounts aren't even controlled by real people, they're zombie accounts (aka spam-bots or bots) run by programs that continuously follow and follow back anyone who follows them.

So with this in mind, it's easy to make it look like you have a ton of people following you. But it's kind of worthless when you want to start inviting your followers to THE LARGEST TWEET-UP IN ST. LOUIS! because spam-bots don't go to parties. Faking Twitter followers is kinda like a guy stuffing socks down the front of his pants. Sure, it looks impressive ... until you actually need to use it.
Spam and spam bots have become a bigger problem as Twitter has become more and more popular, which is too bad because spam really diminish the service's utility. Twitter has been trying to get a handle on it for a while now, by trying to identify suspect accounts and disabling them wholesale. The problem is, it's getting harder and harder to ID these accounts. But it's not like this is a problem that's unique to Twitter. Spam has made email useless for a lot of people, and a lot of people will say that spam accounts are what caused the demise of MySpace. Facebook actually invited spammers in by allowing them to create all those annoying apps. Spammers are like roaches on the Internet, they'll probably be here long after MySpace, Twitter, and Facebook are long gone.