Behind the Story: "Where's the Beef?" 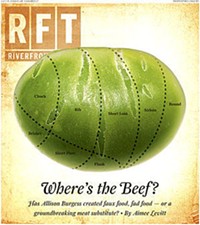 My feature story "Where's the Beef?", just out today, tells the story of St. Louis' very own Allison Burgess, a vegetarian who was tired of the limited meatless options in restaurants and decided to create her own meat substitute. The result, Match, mimics the flavor and texture of meat and allows chefs to add their own seasonings.

The idea of faux meat was not a popular one here at RFT world headquarters and led to a round of philosophical debates about the nature of meat itself, and also of vegetarianism, and speculation about who the hell would want to eat this stuff. These debates are recreated in the article, but by experts on nutrition and food history.

The key question about Match, however, is much simpler: How does it taste?

I am, I must admit, a devout carnivore and also a somewhat picky eater, but in the interest of fair reporting, for a few weeks I ate a lot of Match. And it was pretty good. My favorite meal, I think, was Match executive chef Freddie Holland's crab cakes, but I also really enjoyed the burger Clint Whittemore, the executive chef at The Market at Busch's Grove, grilled up for me.

Burgess and Holland understand that the general public is dubious about meat substitutes. Their marketing strategy has been to get as many people to eat the stuff as possible. Over the next week on Gut Check, I'll be posting Match recipes created by some of the chefs I interviewed for the story, including the aforementioned burger and crab cakes, for you to try at home.

Here's a list of retail locations around St. Louis where you can purchase Match, as well as restaurants you can visit if you prefer to try Match prepared by a professional.