June 29, 2009 at 8:00 AM
comment
For the second time this season a person attending a Cardinals game has fallen over a balcony and crashed into people seated below. 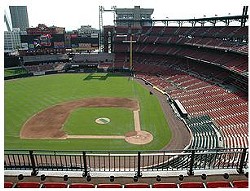 The latest incident occurred Friday evening when 34-year-old Chris Hoffman of O'Fallon, Illinois, spilled over the railing in section 454. Hoffman apparently passed out during the playing of the National Anthem and fell from his upper-deck perch onto two people seated in section 354.

Those people escaped uninjured. Not so for Hoffman. Major League Baseball reports that emergency crews found him with his head down near the pavement and his feet dangling over the seats in the row behind him. He was moving his arm but his face was badly cut and covered in blood. After receiving on-site treatment, Hoffman was strapped to a stretcher and taken immediately to a local hospital.

A similar incident occurred in April when a man fell 18 feet from a balcony, severely injuring both himself and a woman seated below.

To wit, one wonders: Should the Cardinals install safety netting at the stadium? Seems like it could be a relatively inexpensive fix to a harmful -- and potentially fatal -- ballpark flaw.