All Hail the Miniature Cow! Bovine of the Past and Future

June 29, 2009 at 3:55 PM
comment
Unreal has observed that anything can be made exponentially cuter by shrinking it. Take the Hostess Donettes currently on our desk for instance. Or the miniature horse.

At seventeen inches, St. Louis very own Thumbelina is the world's smallest horse. 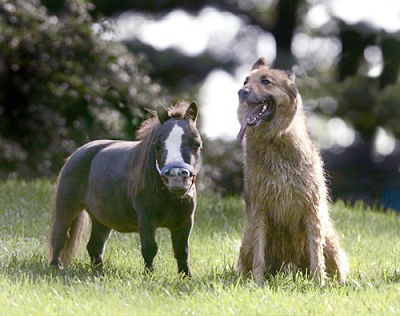 Don't you just want to pick her up and squeeze her? Now it has just come to Unreal's attention that there are also miniature cows. And bulls!

Miniature cows, however, have a greater purpose in life than merely being cute. These cows work. And then we eat them.

You can also milk a mini cow and get two or three gallons a day, although you have to kneel down to do it.
More significantly, reports the Los Angeles Times, mini cows occupy less space and consume less feed, which is important these days now that the price of land is falling and the cost of feed is rising. There are now 20,000 mini cows in this country.

Interestingly, mini cows are not some mutant strain of bovine. Instead, they are the descendants of cows that originally immigrated here from Europe in the 1800s. Animal scientists didn't start breeding what we now consider regular-sized cows until the 1950s, when nobody fretted about the cost of land or feed.

William Saletan argued last week in Slate for a parallel between cows and humans, notably that now it is the oversized cows that are considered "normal" these days, just as only fifteen percent of obese humans actually recognize themselves as obese. He suggested that someday quite soon thin people will be considered "mini humans." Unreal thinks he took the film Wall-E a little too seriously.