"If You Ever Eat Pickled Eggs and Drink Beer, It Smells Worse Than Them Kind of Farts." 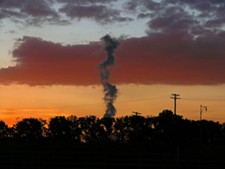 Parts of Madison County, Illinois, have the second-most poisonous air in the country, according to a new report issued by the Environmental Protection Agency.

Most alarming was one particular Granite City neighborhood, located near U.S. Steel Corp., whose residents have a 1,100 in a million chance of developing cancer from airborne toxins. Only one other area in the country -- a neighborhood in Los Angeles -- had greater cancer risks. (The average cancer risk from air pollutants in the U.S. is 36 in a million, according to the National Air Toxics Assessment.)

The EPA report had me thinking of a feature story I wrote last year about a citizen's movement in Crystal City to block an iron-ore smelter from locating into that community. As part of their research, the activist group Concerned Citizens for Crystal City traveled to Granite City to interview residents living near U.S. Steel Corp.

Following is a short video clip of that interview. It's pretty priceless. Especially when they ask an elderly Granite City resident to describe the odor coming from the steel mill. (Hint: You'll soon discover where I got the headline for this post.)