June 24, 2009 at 11:40 AM
comment
In a survey of the nation's most crime-ridden neighborhoods by Dr. Andrew Schiller of the website NeighborhoodScout.com, St. Louis' very own downtown, specifically the intersection of 14th Street and Martin Luther King Drive, ranked fourteenth.

How nice that this statistic appears just in time for the All-Star Game! 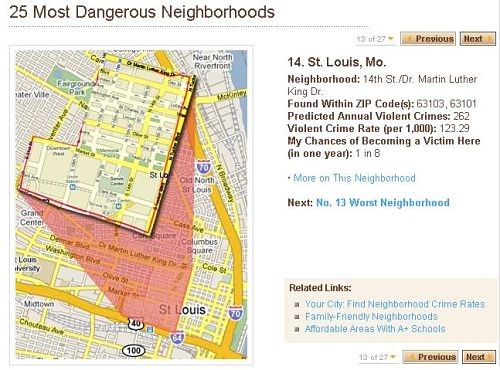 But take heart, St. Louisans: Downtown is not the most dangerous neighborhood in the state of Missouri or even within a 100-mile radius. Kansas City cracked the list twice, at numbers 6 and 8, while the Pioneer Park neighborhood of Springfield, Illinois, just edged us out for the number 13 spot.

Schiller based his rankings on data from the FBI and 17,000 local law enforcement agencies, collected between 2005 and 2007. A neighborhood's "danger" ranking is how likely a person is to be a victim of a violent crime (i.e., murder, rape, robbery or assault). Someone at 14th and MLK has a 1 in 8 chance of becoming a crime victim within a year.

The most dangerous neighborhood in America is Over the Rhine in Cincinnati.