President Obama to Throw Out First Pitch at All-Star Game 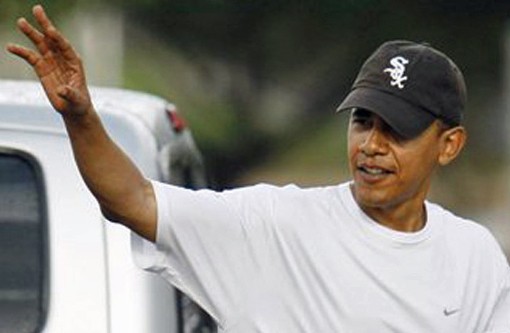 This just in from Major League Baseball:

Obama to Become the Fourth U.S. President to Throw Out First Pitch at MLB All-Star Game

President Barack Obama will throw out the first pitch at the 2009 Major League Baseball All-Star Game on Tuesday, July 14 at Busch Stadium in St. Louis.

"Major League Baseball is truly honored that President Obama will be in attendance to throw out the first pitch at the 80th All-Star Game on July 14 in St. Louis," said Baseball Commissioner Allan H. (Bud) Selig. "The central theme of the 2009 All-Star Game is community service, celebrating the extraordinary work being done by ordinary people. We are thrilled that we can come together with President Obama, who has encouraged a renewed spirit of national service, and illustrate a call to action in our communities. President Obama will continue a great tradition that joins our nation's leader and the national pastime."

Following is a list of Presidential appearances at the MLB All-Star Game:

The 80th Major League Baseball All-Star Game will be played on Tuesday, July 14th in St. Louis and will feature the best of the American League taking on the top players of the National League. At the ballpark, the events will include Taco Bell All-Star Sunday on Sunday, July 12th featuring the XM All-Star Futures Game and the Taco Bell All-Star
Legends & Celebrity Softball Game, and Gatorade All-Star Workout Day on Monday, July 13th featuring the State Farm Home Run Derby. Outside of the ballpark, fans will have an opportunity to experience All-Star Summer through a variety of special events including Major League Baseball All-Star FanFest, the five-day interactive fan festival; the MLB All-Star Charity Concert presented by Pepsi benefiting Stand Up To Cancer, a free concert for fans under The Gateway Arch featuring Sheryl Crow; the All-Star Charity 5K & Fun Run presented by Sports Authority and Nike, a charity run on a baseball-themed route to benefit three cancer organizations; and the All-Star Game Red Carpet Show presented by
Chevy, a free parade of All-Stars leading into Busch Stadium. For more information about 2009 All-Star Summer, visit www.allstargame.com