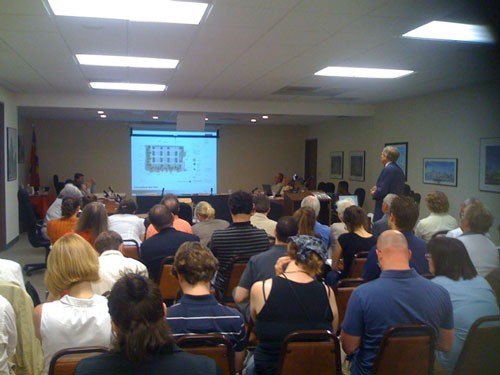 Last night while I was enduring a five-hour power outage in my neighborhood, the St. Louis Preservation Board was meeting to determine the fate of the San Luis building (previous story by Keegan Hamilton) in the Central West End, which the St. Louis Arch Diocese would like to demolish to build a parking lot. This is a building that has become the cause celeb for a lot of local bloggers and urbanists who don't want to see the once grand St. Louis cityscape devolve into something that looks like ... well ... Chesterfield.
I was unable to attend the meeting. I was busy trying to keep myself and my family cool due to the power outage. But I was able to follow along via Twitter. Yes, Twitter shows its value once again (second time in a single month!) by providing news and entertainment even in a power outage. Oh and my iPhone makes an excellent flashlight.
Here's what happened at last night's meeting as told through the thumbs of the twittering faithful...