St. Louis Needs a Beach Not Named "Times" or "Pontoon"

June 22, 2009 at 12:36 PM
comment
The Post-Dispatch story yesterday on the race riot 60 years ago at the old Fairgound Park swimming pool stirred up some horrid memories of St. Louis' not-so distant past.

It also left open a question about the city's future. Namely, how come this city with its insufferable summers (the heat index is 102 as I write this) doesn't have a large, swimming hole that could serve as a default beach for the community?

We used to have one. It was the massive swimming pool at Fairground Park. Here's a photo of it from way back. 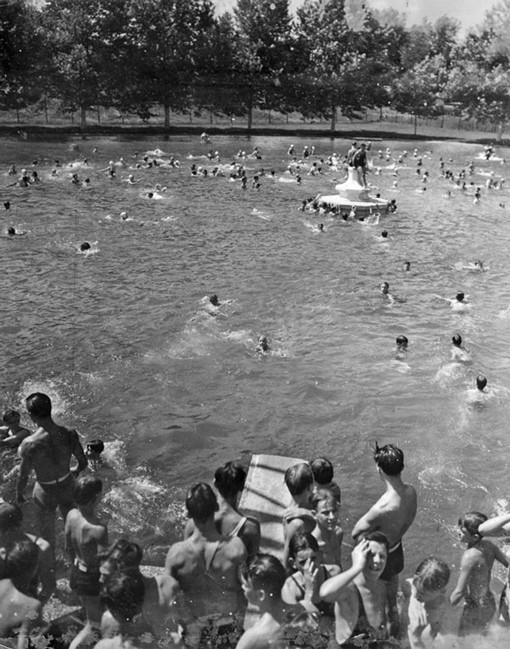 Granted that pool was frequented only by white residents, and it became somewhat doomed following desegregation. As the P-D reported yesterday:


Meanwhile, many whites boycotted the Fairground pool, and attendance dipped. The landmark pool was closed in 1956.

Would a similar pool fail today? I don't think so. Not if it's a true landmark like the old Fairground Park Pool. One need not look any further than Heman Park pool in University City for proof of that. The old, 1930s-era pool remains one of the few places in St. Louis where blacks and whites socialize together. Too bad it's only open to U. City residents.

As I've blogged about earlier, the city of Austin, Texas, (like St. Louis) has a river but no public beach. They do, however, have a huge, spring-fed swimming pool that draws the entire community -- regardless of zip codes -- on hot summer days.

Why not St. Louis? Hell, we already have a pool equal to (if not greater) the old one at Fairground Park. Anyone for a dip?

The Forest Park Grand Basin. So big. So inviting.