Hear the One About the Missouri Department of Transportation and the Nazis? 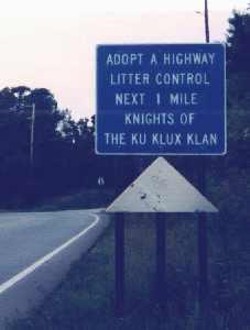 The New York Times had an interesting story this weekend about the Missouri Department of Transportation (MODOT) and its ongoing battle with racist groups that want to adopt highways.

As the Times reports:


...states have little leeway when it comes to signing off on the adoption papers for their roads, and several have found themselves compelled to put up signs recognizing groups with long histories of racism or anti-Semitism or associations or businesses that have engendered controversy.

But as the newspaper also notes, Missouri officials have a way of getting back at the racist groups. It involves more signs.

If you drive Interstate 55 from St. Louis County to Jefferson County chances are you've seen one of these signs. It's that brown placard on the side of the highway that identifies the stretch of I-55 as "Rosa Parks Highway."

The highway's honorary title came after the Ku Klux Klan won a lawsuit over MODOT in 2001 allowing it to adopt a stretch of I-55. To compensate for its coutroom defeat, state lawmakers renamed the strip of highway the Klan had adopted after the famous civil-rights activist, Rosa Parks.

This year state legislature has approved a similar bill that would rename the highway recently adopted by the National Socialist Movement. If signed into law by Governor Jay Nixon, the road will soon have a sign honoring Abraham Joshua Heschel, a Jewish theologian and civil-rights leader who fled Nazi Germany.

And as you might guess, the National Socialist Movement is none too pleased with the potential name change.

"I think it's childish," Cynthia Keene, a sergeant in the group's Springfield unit tells the Times. "If they want to have Nazis out there stomping on a Jewish-named highway, that's their choice."